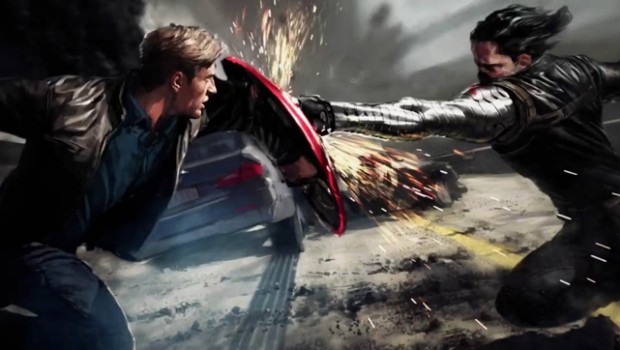 We covered the first full Winter Soldier trailer and were pretty impressed by it. Now the second trailer is out with lots of new footage so it’s time to find out if we’re still as excited to see Marvel’s next release.

Here is our antagonist in his birthing chamber, so to speak. The Winter Soldier’s beginnings are very similar to Captain America’s. They’re a kind of Yin and Yang to each other. You know, if the Yin was red, white, and blue while the Yang was just plain red.

Plus, the guy you see in the picture is Winter Soldier’s creator Ed Brubaker in a nice little cameo.

– But Who Will Be In The Post Credits Sequence?!

I really like the decision to have The Winter Soldier attack Nick Fury. Up to now Fury has been a near perfect, untouchable figure. To have him made vulnerable and seemingly (if the next shot of him unconscious in a hospital is anything to go by) taken out of the picture it leaves Cap in charge of his own actions. It will require Cap to step-up and become the leader/hero we know him to be.

But Nick is just one piece of a really great ensemble cast of heroes in what is technically supposed to be a solo movie.

I know she technically had the wrist shooters in previous movies but I’m still excited that they’re being used in the cool way they’re being shown here.

Grapple-hooking as she jumps off a bridge from a flaming car and then walking away like a boss? That’s what I’m talking about.

– I Believe He Can Fly

I mentioned previously my love of Falcon. We see lots more of him in this trailer and it’s good to know that while he will be assuming the side-kick role he’ll still be getting plenty of action of his own.

I really hope he comes out of this movie as a break-out star.

Overall: I didn’t think it was possible but I think this trailer has actually made me more excited for the film. I’m gonna put my neck on the line now and say that I think it will be the best Marvel movie yet. If this footage is anything to go by, I’m not worried about being wrong.