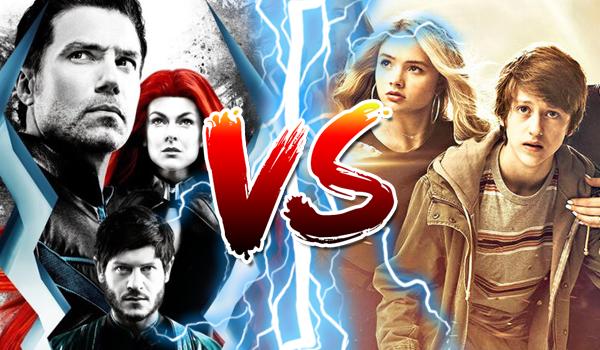 Within the canon of Marvel Comics, there’s many kinds of enhanced individuals but those born with innate abilities tend to fall into two distinct but similar categories: Inhumans and Mutants. Both gain their powers from traumatic experiences, both are maligned by baseline humans and both have television shows currently airing so I figured I should compare the two for funsies. Don’t worry, no spoilers here!

After the Royal Family of Inhumans is splintered by a military coup, they barely escape to Hawaii where their surprising interactions with the lush world and humanity around them may prove to not only save them, but Earth itself.

It’s Space Game of Space Thrones, essentially, except with shoddy acting and sterile sets. While this shouldn’t be too bad as a concept, we’re thrust into the lives of these extraterrestrial beings with only a fleeting mention of a connection to the Terrigen contaminant we’ve seen in Agents of S.H.I.E.L.D. so unfortunately the audience can be kind of lost on initial viewing without prior knowledge of the characters.

The Inhuman Royal Family will be spending the majority of this 8 episode run on the stunning island of Hawaii and the unique cityscape and surrounding nature makes for a nice change of pace to the usual stock sets used in other Marvel productions.

With the cast splintered, we’ll be seeing lots of unique experiences for the relative aliens and maybe some good character development, all culminating in one final show with the main antagonist, Maximus.

Two ordinary parents take their family on the run from the government when they discover that their children have mutant abilities, and join an underground community of mutants who have to fight to survive.

It’s your basic X-Men plot but not one that the Fox X-Men movies have tackled at all and with such a tight focus on two distinct groups of characters, this series aims to put a spotlight on all of the social commentary and allegorical story-telling ideas that X-Men stories are lauded for and in the current social climate, that’s a great thing.

With a Government-backed black-ops group intent on hunting them, the strife that the Struckers and the members of the Mutant Underground find themselves in definitely has echoes of The Underground Railroad or The French Resistance and this will lead to some fascinating character dynamics and some great set-pieces over it’s 10 episode run.

Let me give it to you straight, there’s only a couple of decent actors and, sadly, one of them isn’t Iwan “Barry Bolton” Rheon. Maximus’s actor struggles to act and put on his ropey American accent and his performance sadly suffers for it. Isabelle Cornish as Crystal is vacuous, uninteresting and your visual bathroom break cue. Eme Ikwuakor and Ken Leung provide decent performances as powerhouse Gorgon and calculating Karnak, respectively.

Rounding out the main cast are Anson Mount and Serinda Swan as Black Bolt and Medusa, the king and queen of Attilan. Serinda Swan is a little stiff in the first episode (much like her hair!) but as we see her adapt to her new situation and act proactively to reunite with her peers, we see that she’s got a little more depth than we first see. Interestingly, she appeared twice in Smallville as Zatanna Zatarra, which is neat. Anson Mount’s stoic Black Bolt portrayal is bang on and I have to admire his dedication to the role, creating a unique set of Inhuman signs to communicate (he hopes to create a functioning fictional language like Klingon or Dothraki). Between that and his quite comical expressions in the second episode, I think he was a brilliant choice for the role.

Of course, the actual best character is the 2,000 pound CGI teleporting doggo, Lockjaw! He’s adorable and he’s the only reason I wanted to see the show in the first place so I’m thankful that VFX company Double Negative did a fantastic job of rendering him, even if he doesn’t exactly fit into most scenes well.

The characters of this show can generally fall into three categories: the Strucker family, the Mutant Underground, and the jobbers du jour, the Sentinel Services officers.

The Struckers (no relation) are your typical family unit but with the added twist of the father being a prosecutor that specialises in putting mutants in jail but this doesn’t go the way you expect. The Mutant Underground are a motley bunch of B-List X-Men, Morlocks and new creations with a nice diverse cast and unique array of powers. Special mention goes to the adorable Jamie Chung (Blink) who is best known as Chi-Chi in the awful Dragonball Evolution and as the voice of GoGo Tomago in Big Hero 6.

From the pilot episode, I feel much more connected to most of these characters than any of the Inhumans cast and I think that’s down to the more grounded storytelling of The Gifted.

As I’ve said before, all the scenes shot in Hawaii are utterly gorgeous and very foreign from what we usually expect whereas Attilan, the Inhuman City on the moon, splits between barren royal accommodation to barren peasant-caste mine areas. Attilan feels sparce, sterile and lifeless. Even the Inhuman haven in AoS had more character to it!

Not only that but the use of Inhuman abilities is very limited. Every one of the Royal Family gets their moment to exhibit them but that’s about it and they’re all mostly underwhelming, lacking the punch I was expecting. The costume designs are a little weird too but I can chalk that up to space fashion.

The Gifted has a more subdued colour palette but more variety in it’s atmosphere than Inhumans does. The night-time opening has harsh neon glows while the suburban family life has a muted sepia feel and the cold blues of the industrial complex and prison facilities all add to the atmosphere in the show and giving it a more film-like quality overall. In terms of powers, The Gifted does not hold back; with each character using their powers offensively, defensively and even in fun/mundane ways!

The show oozes quality on par with it’s kooky cousin Legion and can easily stand up to any Marvel show on visuals alone.

This is purely down to my personal taste and I’ll give my best reasoning for which show I recommend but know that while I enjoyed both shows to an extent, one was clearly superior and that show was The Gifted.

The Gifted feels very much in line with it’s universe and it’s predecessors while Inhumans feels the most disconnected of the Marvel shows so far, mostly due to it’s bizarre subject matter. Not only that but while The Gifted has a lot going for it, Inhumans necked itself out of the gate by being a mediocre TV pilot that was shown on IMAX screens; further highlighting its flaws and thus gaining the infamous criticism that it’s garnered.

I highly recommend The Gifted if you’re a fan of the X-Men, the movie franchise, Legion or all of the above and I cannot do the same with Marvel’s Inhumans.