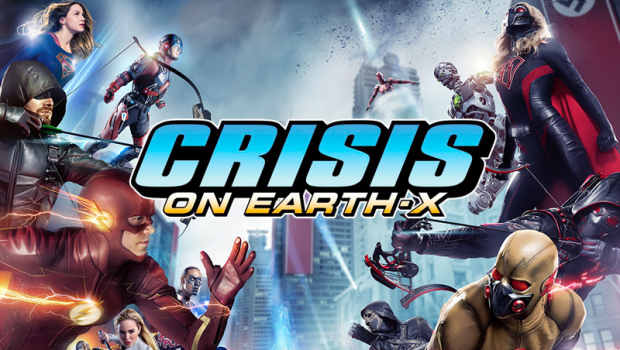 I’m not even kidding; as good as last year’s Invasion crossover was cool, this year’s kicks off it’s two-night spectacular in style with Supergirl and Arrow, even if the casts are so meshed that you can’t even really tell which episode is which.

They don’t bury the lead either as we open on Earth-X itself, with crimson, lightning filled skies that bring to mind the Dark Multiverse worlds from the recent DC Comics event, Dark Nights: Metal. Black and crimson banners fill the skyline along with strange architecture and zeppelins. Oh yeah, we’re in Nazi Country.

A resistance warehouse is attacked and decimated by one lone archer, showing that Earth X’s Dark Arrow is not to be trifled with and he proves that by taking on that Earth’s James Olsen aka Guardian, in a way more beat-up patriotic version of his suit. He unfortunately dies but assures DA that there are more like him, nicely hinting at the upcoming animated Freedom Fighters: The Ray, which serves as a prequel to this crossover.

We catch-up with our main heroes as they’re all discussing the upcoming wedding, with nice location titles using the font of each respective series. It’s a neat little sequence, overall and serves as an introduction to the majority of the players for these first two parts.

During the build-up to the event, we get quite a lot of information dumped on us for those who may not watch every show and to show how all these disparate groups interact and it’s nice to see Barry catch up with Ollie and Kara again. They built up a real bond over the past couple of years and it’s paid off here as Ollie is best man and Kara does a beautiful rendition of Runnin’ Home To You, an original song from the musical team-up, Duet.

Kara’s adoptive sister, Alex, and Sara Lance hook-up the night before the wedding! Alex, rebounding from a recent break-up, and Sara, a notorious puss-hound, make for some nice, awkward comic relief but given how funny this collective cast is, there’s plenty to go around…

Like Mick! Dominic Purcell is frequently the funniest cast member on Legends of Tomorrow and is used to decent effect here, partnering up with Caitlin, most likely as a Snart surrogate. Get the whole fire and ice motif rocking again. They even have a go at Dark Arrow before being jobbed out (along with the rest of Team Arrow).

Back to the wedding where Nazis invade! It makes sense in hindsight since nearly every CW hero is gathered together but this gives the show the ample opportunity to have everyone show off what they do best and it gives one notable absence a real highlight…

While Kid Flash won’t be partaking in the event proper, Wally does get a really slick moment that made me smile and then made me sad because he’s amongst the three other black heroes that are sadly missing from this team-up.

OH! I should make mention of another odd attendant besides the assemblage of heroes and the Nazi gate-grashers. This odd little moment between Grant Gustin and a rather excitable Jessica Parker-Kennedy who is playing an unnamed character but my Spidey-Sense is tingling and I think she’s going to be important. There’s two theories I can offer but I’ll keep them under my hat for now.

Now, I guess I should talk about some of our villains and while Dark Arrow and Overgirl are just married versions of Ollie and Kara (gross, I know), they do make a menacing power couple and there’s a fair amount of affection between the two. The real odd-balls are Metallo, with some of the ropiest CGI this poor stretched production could muster and Eobard Thawne. Our Eobard Thawne. Wearing Wells’ face. I know they make mention of time shenanigans but this is ridiculous. I know they’re only doing the Wells-face again because they’re burning through their budget like no tomorrow and Tom Cavanaugh is up for literally anything but it’s still super weird.

Not as weird as Tommy Merlyn being Prometheus though! Holy shit! This was a swerve and a half and I applaud the writing team for bringing Colin Donnell back to Arrow after 5 seasons of his character being dead! Though I will admit that I didn’t recognise him immediately and only marked out when I heard his name.

I know there’s still a lot I haven’t covered and I’m already pushing 800 words but rest assured, I loved every second of the Supergirl and Arrow parts of this crossover and I can’t wait for tomorrow’s episodes when we’ll see Overgirl try to steal Kara’s heart and the rest of our heroes try to escape from Earth-X alive! Are you enjoying this year’s event so far? Let me know your favourite moment in the comments and I’ll catch you guys tomorrow for The Flash and Legends of Tomorrow!