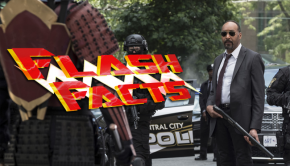 Well…. That didn’t take long at all, now did it?

Awwwww, yeah! Now this is some Grade-A comic book television!

T’was all a cunning ruse!

Flash Facts – “Who is Harrison Wells?”

Surprise! We already know the answer!

Hey now! You’re an All-Star! Get your game on! Go plaaaay!

Flash Facts – “Out of Time”

Mmmm, whatcha saaaay! Mmmm, that you only meant well? Wells, of course you did…