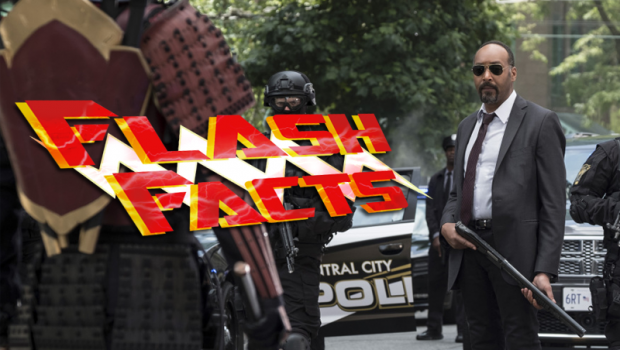 Well…. That didn’t take long at all, now did it?

Welcome back to Flash Facts, everyone! I’ve missed this and you guys and watching my favourite CW-verse Team but do you know what I haven’t missed?

Barry Allen as god saviour of all. I’ll be straight with you that I was not looking forward to the first few episodes of Season 4 because I knew that they would bring Barry back immediately because it’s not like we have another Flash on the show that’s been steadily developing or anything…

I will admit that bringing him back as an insane amnesiac (avec sick-ass beard) was a neat idea and I wish they’d at least kept him out of the suit for a few episodes if they were intent on bringing him back immediately after his sacrifice. The bizarre language Barry is writing in doesn’t conform with any written language established in DC Comics though it does bear a pacing resemblance to Interlac, the language of the 30th Century. His speech is a whole different beast as, amongst his ramblings, there seems to be a few snippets of dialogue from upcoming events. Again, if this manic state had continued, we could have used Barry as a bespoke early warning system while his mind readjusts to non-Speed Force reality.

Wally and Cisco get it bad this episode and that sucks! Despite clearly being active for 6 months inbetween seasons, we have to watch them act like bumble kings despite them being mostly capable in the previous season. I mean seriously, these guys get jobbed out by Peek-a-Boo and the super obscure Samuroid and THAT’S the impetus to bring Barry back? Boo-urns! You could have at least made it a gathering of The Rogues. I did dig that Wally just knows Japanese, nice little character tid-bit.

As bad as Wally and Cisco got it, Iris got it worse because she was damn good this episode. Candice Patton does a fantastic job playing Iris as a strong leader and voice of reason. Despite Barry’s loss, she seems to be the only one willing to live by his wishes and move forward, actively getting Wally and Cisco to train while acting as their “guy in the chair”. Having her continue her growth without Barry for a while would have been really interesting to see.

Caitlin has gone full Bruce Banner in the 6 months the Team haven’t seen her, now switching between Caitlin and Frost based on emotion. Interesting wrinkle, more interested in that dive bar she was working at and why the manager looks so distinctly unique. Questions for later in the season, probably!

In the final moments of the show, we find out who sent the Samuroid to literally welcome Barry home and it’s the Season Villain du jour, DeVoe aka the Thinkers – looking an awful lot like Metron of the New Gods in his floating chair and futuristic lair. I have to wonder at the design choice here because while Thinker is known for being one of the Flash’s smarter villains, he’s never really stolen Metron’s look before. Maybe it’ll be explained further in the season but for now, just a curious thing to note.

So that was The Flash Reborn, a bit of a tepid return to the series with a rather obvious plot line. It was disappointing but hey, it could have been worse! We could have had a 4th Speedster as the big bad! *shudder* Anyway, thanks for reading, let me know what you guys thought in the comments and we’ll be back next week to see if the show continues to send Mixed Signals.