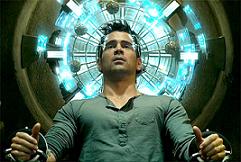 While the original is a classic piece of cinema, I wasn’t of the fanboy level screaming “they’re destroying my childhood” when I heard Columbia Pictures were doing a remake. In fact, I thought it would never actually happen and that the production would end up in the “what ever happened to…” category of history as these things often do.

It’s here now and Colin Farrell is filling the very large shoes of Arnold Schwarzenegger in the role of Quaid. Kate Beckinsale is taking over from Sharon Stone. With the likes of Bryan Cranston, Jessica Biel, and Bill Nighy rounding out the cast list, it’s starting to look promising.

But as we all know, things can still fall apart at the seams. With the first full trailer being released this week I thought it was worth taking a look.

Here are some general thoughts on first impression…

In our first bit of action we’re shown pretty much the whole premise of the movie. Quaid doesn’t know who he really is but who he really is seems like a bit of a bad-ass. How do we see this? He kills a bunch of stormtroopers.

Like it or not, that’s what they look like. Put a bunch of faceless guys in white armor and make them easy to kill and you got an army of Stormtroopers. FACT.

– Hi, My Name Is Spoiler

I felt that the inclusion in the trailer of Beckinsale’s betrayal of Quaid was a little bit of a ruined opportunity.

Sure, anyone who has seen the original would know but that was 20 years ago now so there is a fresh audience out there who could have been surprised by this in the movie. Maybe it’s too integral to make a trailer without including that bit of info, but considering the trailer is only 2 minutes long, I would argue that it’s just shit editing holding them back.

One of the things I liked about the original and indeed, most sci-fi movies pre-1990 was that they always presented the future as grungey, dirty places. And while there are elements of that visible in this trailer there are also moments of the current trend of everything looking like it was designed by Steve Jobs.

This is clearly a famous scene that has been changed in a cool way.

To be honest, I struggled to find bits to talk about with this trailer. It all seemed a little bland. There could be some good action in this new version and I like the Farreller as an actor so there is things to be excited about. I guess the trailer just hasn’t made me excited yet.