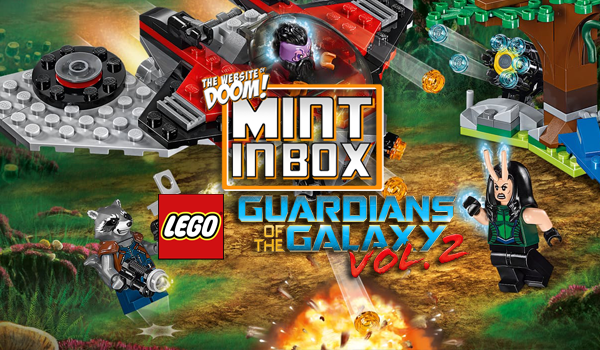 Why are the Ravagers attacking? No clue! But what I do know is that I’m digging the changes LEGO has implemented in this new sub theme and I’m going to flarkin’ review this set! 76079 Ravager Attack consists of two bags of assorted parts (around 197 pieces), an instruction booklet, sticker sheet and a comic that helps with the context of the set somewhat. Apparently Taserface (who knew that was his name?) usurps leadership of the Ravagers from Yondu and hunts the Guardians on behalf of the golden Ayesha. Neat! As always, we’ll check out the minifigures first and we have Mantis, Taserface and Rocket Raccoon. The newest member of the Guardians, Mantis, doesn’t have any accessories but has a unique hairpiece featuring antennae and an alternate angry face. Speaking of faces, Taserface’s is one of the ugliest I’ve seen depicted on a LEGO noggin. He’s got a cool top knot-long beard combo and has a big brick-built stud shooter bazooka. This is my first time handling a Rocket minifig and while he’s pretty big for such a small character, his unique head/shoulders sculpt is impressive and he even has a tail waist piece. He comes with two assorted blasters. The first bag and half of the second consists of Taserface’s M-ship, an odd name but maybe that’s just the class of ship that it and the Milano belong to. The first bag contains the top half of the ship, building most of it’s impressive wingspan which actually accounts for the majority of the ship. It’s a deceptive little build, making the final product appear much bigger than it actually is, at least to my mind. It’s like a reverse TARDIS, way bigger on the outside compared to the underslung cockpit. I really dig this sly little ship and it’s simple yet robust build. The latter half of the second bag builds up the tree and gatling stud blaster. It’s simple but flourishes this small piece of forest with a splinter of the Milano’s hull plating and the make-shift cannon built by Rocket and Mantis to give it some pop and make it part of the story.

The M-ship, gatling launcher and Taserface’s bazooka all fire their studs super-effectively, enough to  warrant the extra studs that came with the set. The 76079 Ravager Attack set, for being the gateway GoTG set that retails for £19.99, offers a lot of play value, three unique minifigs and a very interesting build for it’s price point and I doubt any LEGO or Marvel Superheroes fan would be disappointed. You can find this set at most good retailers, instore and online and also on the LEGO shop.