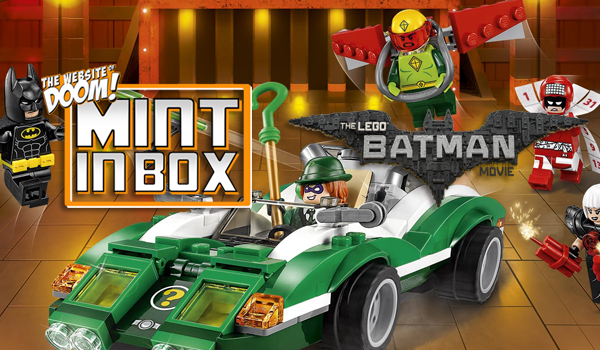 To say I’m excited for the upcoming release of The LEGO Batman Movie would be a gross understatement. I adored the original The LEGO Movie and Will Arnett was definitely a stand out performance so to give that particular Batman his own movie and then populate it with every forgotten villain that only I would know? I feel like this movie is made for me! So the lovely folks over at LEGO were kind enough to provide me with 70903 The Riddler’s Riddle Racer to play with and I’m positively giddy! This set retails for £29.99, features 254 pieces and contains two bags of assorted parts, a sticker sheet, one black plate and an instruction booklet. As always, we dive into the minifigures first and for a £30 set, you get a lot of minifigures, most of which are favourites of mine. First up is the titular Riddler, looking both smarmy and indignant thanks to his swappable faces and the headpiece for his hat is at a lovely jaunty angle. Magpie wasn’t immediately familiar until I found out that this design is more based on her appearance in Beware The Batman and not the ludicrous 80’s design I knew her for. In the realms of Rogues Galleries, you’re not going to get a more eclectic bunch than Batman’s baddies and we have two of the dumbest (and therefore two of my favourites) here with Calender Man and Kite Man. Much like most the villains in this movie, they appear in their super-dumb, yet super-endearing, original costumes and I love them because of it. Batman is much like the myriad of previous Batman minifig releases but, much like Buzz Lightyear in Toy Story 2, now comes with a shiny new utility belt! It’s a nice little piece that changes up the status quo for one of the most prolific minifigures around. The first brick-built segment of the process is Kite Man’s flying apparatus and it’s a perfectly good little glider pack, not pushing the boat out but still neat. The titular Riddle Racer takes up the majority of the build, the first bag building much of the body work… While the second finishes it off and holds the engine/weapon gimmick. The finished Riddle Racer is a sleek little number that sadly only seats The Riddler but makes up for that with it’s sleek curves and overall awesome aesthetic.

The missile-firing gimmick is particularly strong too, easily launching missiles at least 6ft across the room! As a fan of LEGO, I liked this set for having a cool looking vehicle but as a massive Batman villain mark, I adore the cadre of baddies you get in this set and, for me at least, that elevates this set to a must-buy! The LEGO Batman Movie range of LEGO sets are available from most major retailers now and you can look forward to the theatrical release on 10th February 2017!