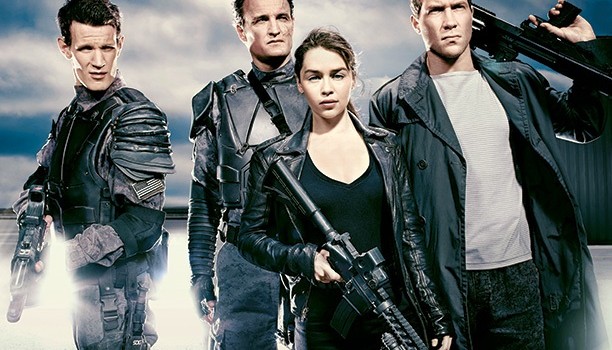 The Terminator franchise has an awkward legacy. Two great films followed by two poor films (your mileage may vary). I don’t think it’s surprising to say that I think another sequel could jeopardise what is already shaky ground at this point.

There are some bright spots though. It’s being directed by Alan Taylor who did the quite good Thor 2 and a half dozen Game of Thrones episodes. The latter brings us to Emilia Clarke in her biggest movie role to date as the younger Sarah Connor. Add to that the returning Arnie, Matt Smith, and Angry Monkey Sequel‘s Jason Clarke you’ve got a pretty decent cast.

But it could still go all wrong. Just ask Christian Bale.

– I Am Sarah Connor of The House Targaryen

I have a lot of respect for Emilia Clarke both professionally and as a person. She’s a reasonable likeness for Linda Hamilton in Terminator 1 (bar the hair) but doesn’t quite have the same Viking warrior presence of her in Terminator 2 so I guess that should probably give you our timeline.

– Eye Know What You Are

Always nice to see a T-1000. Sure, not if one was really after you, but in the movies they’re great.

Look at the Play-Doh head on him! He looks like a Stretch Armstrong.

Ugh! I hate these sort of ridiculous effects. Nothing is going to make a bus do these kind of gymnastics. If I’m supposed to be invested in a film, I need to believe in that world. I know this may seem silly to mention in a film with robots from the future but that’s a technology I can understand and get into. Bus back-flips are just dumb.

Overall: I still don’t know. This could be pants. Matt Smith was in all the promo photo-shoots for the film but nowhere to be seen in the trailer which is suspicious. Arnold’s involvement at this point is almost a distraction. I don’t know. I just don’t know.