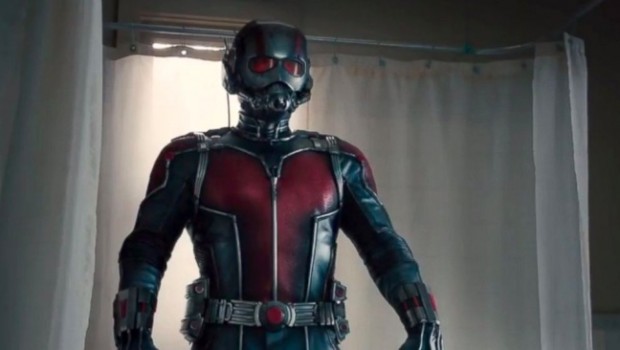 Ant-Man is about to be released in July. That’s 3 months away. Considering how little we’ve seen of the footage so far you have to wonder if this film is in trouble. There has already been lots of news reports about delays and reshoots, not to mention the infamous changing of director last year.

The positives are that after over 7 years of work, the film is finally here. Paul Rudd gets to be a super-hero. Michael Douglas is in a Marvel movie as Hank Pym. Evangeline Lilly gets to be in a movie without elf ears or having to make gooey eyes at a dwarf.

I’m a little nervous, as you can probably tell, but I still have hope. A full two and a half minute trailer has been released today. Lets take a look shall we?

Ant-Man’s ant power is something that is mostly forgotten about these days in the comics but it did feature much more heavily in the early days of his comic appearances. They seem to be a big part of this movie now too. – Out of the Way of the Gun

Moments like this, of Ant-Man literally dodging a bullet make this film feel like a contender. Lots of people have talked about selling the idea of Ant-Man and his powers being a difficult prospect. Shots like this are cool enough to calm some of those nerves. This bit is kind of confusing. Yellowjacket was the alias for Hank Pym for a period in the comics, and not a bad guy. Darren Cross is a villain in the comics but he did not have an Ant-Man-like suit. They’ve arrived at this bit and it’s not the worst thing in the world but it is too familiar. The Iron Man films made a point of making his bad guys have his technology. It’s a morality tale about power and responsibility (don’t tell Spidey) and, well, we’ve seen it before. It’s a bit disappointing for them to take the same tact this time. I know Pym doesn’t exactly have a great rogues gallery but I think they could have done better. – Revenge of the Fat Controller

We’ve all had this nightmare, right? Just me? OK. I will say though, I wonder how people will react to the ridiculousness of what looks to be the final battle of the film.

Overall: Oh god, I’m really not sure. This could go either way. I doubt it will be a huge flop, Marvel is a trusted brand at this point and people love Rudd, but it could be the first Marvel film to under perform. I worry. I worry. This trailer did not reassure me.