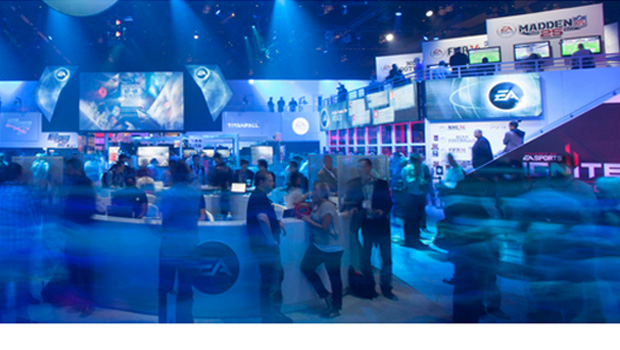 Alright. The EA press conference is over. For further discussions interact with me on twitter @TheMadSpin!

OK, it’s cool that they’re launching a BETA for Battlefield Hardline today. If you’re into it, this has got to be great news.

Why are people screeching at the press conference? If EA hired them, it makes EA look stupid. If those are just normal people in the audience acting like morons, someone should ask them to stop.

I’m interested in seeing Visceral work in a universe that doesn’t involve a single supernatural creature, but I’m not exactly floored by another game where people shoot at people in a city.

I mean, I’ll play a couple of those next year and love them, but I won’t play them all–and so far this game doesn’t stand out.

Look, I don’t even enjoy watching Soccer (Euro-football if you must), but even I think FIFA is a terrific series. If they’ve found a way to make it better, I’m interested–even if they do pronounce it “Feefer.”

DICE is up again, this time for some information on the long awaited Mirror’s Edge sequel.

If you need a great title to hold you for now, check out Mirror’s Edge for iOS. It’s a terrific game.

If you can’t wait, you should run through your town leaping from building to building. This doesn’t work if you live in a small fishing village.

I’m exhausted with MOBAs, but at least we’ve finally ended our run of games that promote encephalitis. Normally I’d have assumed golf was concussion free–but did you guys see the battleship? Remember that?!

I may not like the genre, but the team is endearing.

The day they finally deliver on the promise of better defensive control is the day I’ll finally buy a copy of Madden again.

Cam looks a lot like a blond Phil Spencer. I guess this is the new uniform in the game industry?

Please tell me Happy Gilmore is a playable character, and I’m in.

He likes his games the way he likes his women: 60 dollars each with out of the box day one DLC.

Seriously though, Criterion makes killer games–though they’ve lost some of their creative core, I don’t expect that to change.

They’re talking about their new office experience–which sounds a bit like the culture at Valve (agile space, open-minded work environment).

Now on to NHL 15–the common thread right now: Concussions.

The music EA chose for that NHL clip was very counter intuitive.

Bruce Lee in the new UFC game. If I was still an 11 year old kid, I’d have lost my mind with excitement at this announcement.

And now we’re talking about the Sims 4. I’m totally tuned out. The obnoxious sounds from the Sims, a canned speech, crappy music track. How many terrible things do I have to listen to at once?

As a poet, I must admit that I respect Gladis more.

A new IP from Bioware–some of it looks like it’s part of the modern age rather than ancient or future. That would make sense. Touchstones for human imagination across multiple generations.

Hey, Bioware–I’m nearly done with my Masters degree in creative writing, plus I have 30 hours of graduate work in game design. Please hire me.

What? This isn’t the place for that? Didn’t I tell you guys to shut up for a minute? I’m talking to Bioware.

I love the tactical options for DA:I

I don’t know that I’ll ever use them on the console–but the option to play either way is a huge nod to the varied player types Bioware has cultivated over the last decade.

Everybody shut up, you shut the hell up. It’s Dragon Age followed by other stuff from Bioware. You guys mean nothing to me right now!

Andrew Wilson kicking things off with a haircut/mic combo he stole from Vanilla Ice.

He says they’re doing things differently this year. He says the common thread is to put players first. That would be different.

The camera is doing a sickly flyover–now it’s panning to the DICE offices to talk Star Wars. I now understand the weird flyover.

I’m not a huge Battlefield fan, but I respect DICE and I’m excited for a new Star Wars game–especially assuming they’re using Frostbite 4.

There’s a big countdown on the EA website. Says the show starts in just under nine minutes. I’m hoping for an hour of Dragon Age footage.

The conference starts at 12 PST (I originally read 11:30 and there was a countdown and everything).

Let me warn everyone that it’s raining pretty heavily where I am, and the power just flickered. If I lose connection, just imagine a bunch of snarky stuff about the new Peggle MMO, and I’ll get back to you as soon as I can.

The EA Press Conference pre-show starts in about 30 minutes.