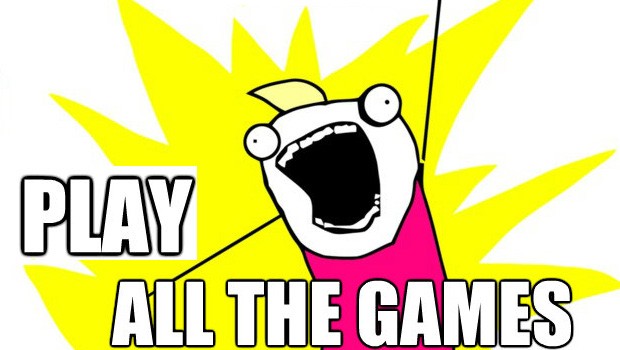 I wrote last week that the biggest game release of February 2014 might be the Beta for EA and Respawn Entertainment’s Titanfall. What I didn’t say then, but I’m definitely saying now: that truth is terrible for the industry. Polygon’s Colin Campbell called the Titanfall Beta a “major collective event in gaming.”

True, although there were 5 million or so Playstation 4 users not invited to the event.

The only alternative PS4 users have to fall back on right now is their own “Beta” access to Final Fantasy XIV—which is neutered a bit by the fact that the game is already out for PS3 and PC.  Next month we can debate (loudly) whether or not the PS4 exclusive titles stack up to the likes of Titanfall, but for now we can say, for certain, that while the PS4 had a lot of sales this month, they’re way behind in the “collective gaming events” category.

But, this isn’t a question of whether or not Sony got it wrong. It’s a flat accusation that the entire game industry missed an opportunity in February. When a demo, essentially a cardboard cutout of a game, out-performs full releases, something has gone wrong. There are only twelve months in a year and January wasn’t too much better than February. As an industry we’ve just wasted 15 percent of our calendar spinning our wheels in the mud.

People were logging onto eBay to pay 5, 10, even 35 dollars for Titanfall Beta codes. Read that again. Gamers were so desperate for a new experience in February, that some paid nearly 40 dollars to get access to a glorified demo that they knew would last only a weekend.

I’m not sure when developers or publishers decided that February was a dead month for pocketbooks, but clearly gamers want to spend money, they want to pay for compelling new content, and they want to pay a premium for it—even if that premium is an overpriced Beta. At least Titanfall had something going for it.

1. It was a new property, with new ideas.

The problem, of course, is that even though EA and Respawn won’t  regret the way they handled the Beta, they still lost something here. None of the money from sold codes make it into the hands of developers—just into the paypal accounts of greedy gamers that signed up for an experience, were granted early access, and then leveraged that privilege in a predatory way.

In his article, Colin calls Titanfall the return of the “old-fashioned demo giveaway.” First, let me say that I balked at this, because I forgot that I’m getting old. I told my wife, “I don’t remember demos showing up on consoles until the original Playstation came packed with a little disc.” Then I remembered that the original Playstation launched about twenty years ago, and took a baby aspirin for my heart.

Still, even during the days of the Playstation, companies were smarter about the way they leveraged their demos. I’d never have owned a copy of Square’s Tobal No. 1 if it hadn’t come packaged with the Final Fantasy VII demo. Likewise, when Konami launched Zone of Enders, plenty of us rushed out to buy a copy just to get our hands on the robust Metal Gear Solid 2: Sons of Liberty demo.

The Final Fantasy VII demo was a huge event. The Metal Gear Solid 2 demo was an even bigger event, because it allowed fans an opportunity to get their names on in-game dog tags. Unlike Titanfall, these demos were huge events that also helped push sales elsewhere, and to draw attention to titles that might not otherwise get the attention they deserved.

So what did we gain from the Titanfall Beta? Obviously, EA proved they could get lots of people together online without their servers exploding, so it may have eased the concerns of those who preordered. We got a lot of people talking about games for a day or two, and I’m sure more than one developer out there took note of the verticality in Titanfall and recognized that consumer expectation might soon evolve.

But, we also surrendered something. We were so unprepared to showcase new ideas, that it was almost too easy for a demo to be the most important thing in gaming during January and February. How many gamers would’ve ponied up money for new games in February if they’d had the option? How many of those people wasted their cash on relatively worthless Beta codes instead? When the floodgates open in March, how many games will collect dust on the shelves because gamers will go from no options, to too many options? Remember what happened to Captain Marvel?

We already know Titanfall hits shelves in March. Thief is the last big title of February (my copy is sitting in my PS4 waiting for me to finish this column so that I can go play). Let’s run through a quick list of stuff coming out in March just to contrast it to what we’ve seen so far in 2014:

Anybody got 450 bucks for all those games? I certainly don’t have it. Those are just the games I found most compelling. There’s a list twice as long (that ignores smaller releases from Steam, PSN or XBLA) that some might pick and choose from (I hear Dynasty Warriors has a following).

It’s hard to believe that none of those games was ready for a February launch (especially Final Fantasy X/X-2, which launched in Japan in December—and must’ve been translated long ago). These are all core games, targeted directly at the core gamer. It’s unusual to see so many titles elbowing one another for the same eyes, at the same time.

I have only a vague prediction—that projected sales for many of these titles will not be met. I can’t predict which titles survive unscathed (though South Park hits early, and is long anticipated, so it and Titanfall will probably be fine). It’ll be a while before we see the sales data on some of these games—and March still stands to be a huge month for the industry as a whole—but as always, a few huge titles may prop up the false notion that the industry is booming, while dozens of other titles bleed revenue quietly.