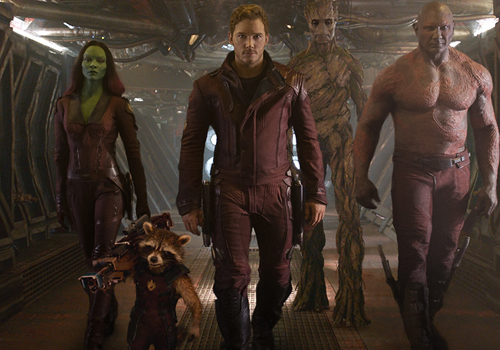 I’m certainly hooked on a feeling and it’s the feeling I’ve had ever since this movie was announced and that feeling was that this would easily become my favourite of the Marvel Cinematic Universe movies. Why? Well, I’ll get into that but check out the trailer and then we’ll talk about that.

The Guardians of The Galaxy in this movie are obviously based on the second team of the same name. In the comics, they were formed by Star-Lord as a proactive response to galactic threats, made up of ex-cons, space magicians, assassins and a celestial madonna. During their tenure, they’ve fought mad kings, the space-church, and the eldritch abominations of the Cancerverse. They were an absolutely great team and they’re one of my personal favourite team books in the Marvel stable so what do I think of the jump to silver screen?

Despite humble appearances, Star-Lord is the leader of this merry band of misfits. A child of the 80’s who hasn’t been back to Earth since then. Accompanied by his trusty walkman (his only connection to his home), Peter Quill finds his purpose amongst the Guardians. I don’t know Chris Pratt other than his roles in this and The LEGO Movie but I’m really digging him, he’s a funny dude so I suppose I should watch Parks and Rec, right?

Gamora is the adoptive daughter of Thanos (the purple, chinny geezer from The Avengers) and is an absolute badass in all ways. Zoe Saldana is no stranger to sci-fi nor playing sexy space women, having previously played Uhurua in Star Trek and swapping the blue hues of Avatar‘s Neytiri for green. I’d use this space to also talk about Drax but apart from having a boner for vengeance, he’s never really been an interesting character and he’s being played by shite-bag Royal Rumble winner Batista. Highlight of the trailer for him was getting a one-armed choke spot from Ronan The Accuser.

The DPS and The Tank

Okay, okay, I’m done with the D&D analogies but seriously, each member of this team serves a particular function and these two are no exception. By far two of the most bizarre and outstanding members of the Guardians are Rocket Racoon and Groot; one a genetic experiment that created a tiny furry sociopath and the other is Groot. Bradley Cooper will be the voice of Rocket and I think that’s a fine choice, even though we don’t hear him speak in the trailer. Vin Diesel provides the voice and motion capture for Groot, a sentient tree-like creature who usually speaks only three words “I am Groot” but his meaning is always known by the crew (or they’re just casting their own ideas about what he says onto him.) The two have a genuine friendship in the comics and I’d like to see that play out. My biggest desire for this movie was that they flesh out the Marvel Cinematic Universe in a more literal sense. We’ve seen what Earth has to offer but now we get to see some intergalactic baddies! Nebula is played by former Doctor’s Companion Karen Gillen. She appears to be just as much an assassin as Gamora and Gillen has alluded to a “complex” relationship with Gamora. Other villains include Korath the Pursuer (played by Djimon Hounsou), Yondu (Michael Rooker) and Lee Pace as Ronan the Accuser.

Sound of the Police! Whoop-whoop-whoop!

So that’s Guardians of The Galaxy and I am hyped! One of my favourite teams, backed by this immense cast and a damn good director shows that despite being the wild card for phase two, Marvel isn’t doing it half-cocked. It’s fully embracing the sci-fi and the silliness and will no doubt be a big hit with the fans. With mainstream audiences however? I dunno. Wait and see. Guardians of the Galaxy will be released August 1, 2014.