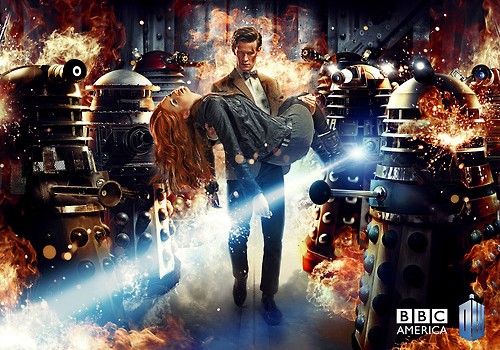 No, YOU’RE a TARDIS – Season 7 Trailer

It’s been a while since we talked Doctor Who here on DOOM but that’s not our fault! For some reason, the new season is taking it’s sweet time to get here but we have had some trailers to tied us over. So this is a kind of…. “No, YOU’RE a Tease, baby!”

Screw me talking about stuff, here’s the trailer!

I love that part of the vid’s code reads ‘fez’

Straight out of the gate, we not only get a Dalek episode, but a Dalek episode featuring every kind of Dalek since the show began! I saw a Heavy Weapons Dalek from Remembrance of the Daleks and I was nursing a semi. Old school, baby!

This isn’t his department!

Rupert Graves, fresh from giving Benedict Cumberbatch hassle in Sherlock, is here to shoot dinosaurs and sleep with Queen Nefertiti and he’s all… out of…. Reasons not to? Sorry, it’s been a while since I did one of these….. Erm, here! Doctor riding a triceratops!

They made them smaller…..

God help us all.

Which ties into my something I wanted to share. Episode 5 of this season will see the departure of Amy and Rory from the series. It will take place in New York and will feature the Weeping Angels.

This is Matt Smith reading the script.

None of us are coming out of this okay are we? The season will be split with the Christmas episode being in the middle of the run which is damn weird. Whelp, no matter what, you’ll be seeing our analysis of Season 7 this autumn! Til next time!