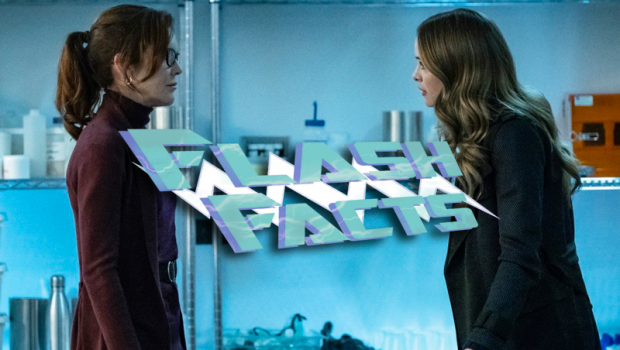 Man, where’s Doctor Forrester when you need him?

Snow Pack does a fairly decent job of carrying on with the good will last week’s episode earned with me. Granted, I don’t care about Caitlin’s family drama, no matter how much of a proxy it’s meant to be for Barry’s situation, but it’s not terrible and everything outside of the Snow Family plot is great too.

Plus Thomas Snow spends most of the episode looking like TV’s Frank and that genuinely amuses me.

Flash Fact: The title of the episode and Thomas Snow’s pet name for his family is a homage to the Mud Pack, a collection of the various Clayface characters from Batman’s rogues gallery.

The immediate fallout between Barry and Iris is great, bad in context for them as a couple, but great for me because this is an actual issue that they have to argue about and I’m eating it up like it’s tiramassu! Yeah, it’s fixed by the end of the episode (strangely, by Thawne urging, no less) and while I do agree with Barry’s stance, it’s brilliant to see Iris take him to task and be just as wrong as Barry at the same time.

I’m wondering if Thawne is actually being genuine or if corrupting Nora was the plan all along as Barry fears because, damn it, Thawne is a charismatic MFer.

He does seem sincere in his words to Nora and Iris but every time they’re not looking at him, he looks like he’s barely keeping in a shit-eating grin. I know I rail on Tom Cavanagh being in the show too much but I’ll stan his Thawne performance all day long!

And we get Nora turning full heel and travelling back to the present by tapping into the Negative Speed Force, using her darkest emotions and all her pent-up anger. I would say that this is unnerving but look at that eye effect, it’s so goofy looking, and it’s not going to improve when we see her change-up her look for something a little darker next week.

Just a quick chat this week because, honestly, I’m knackered from work and the stream I used was a ball-ache to get running but I liked this episode overall so it’ll be interesting where we go with seemingly two big bads in the form of Nora and Cicada II.

They’re not gonna team-up just yet but we are getting the ropiest assortment of Rogues next week as Bug-Eyed Bandit, Weather Witch, and Ragdoll join Nora because she’s Gone Rogue.