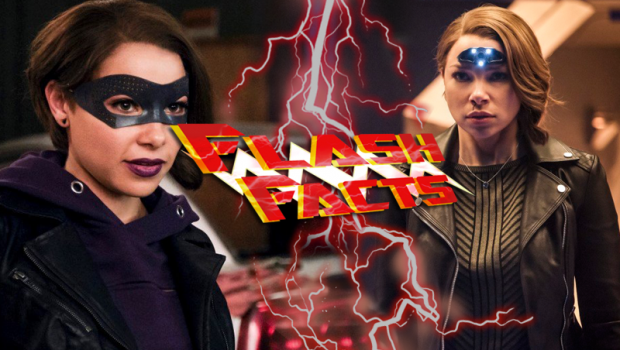 Flash Facts – “Gone Rogue” and “The Girl With The Red Lightning”

Double-down on the double-down!

Well, this was originally going to be two separate reviews but DOOM had some log-in issues so I couldn’t post until today (mucho thanks to Editor-in-chief John for fixing the issue) so I guess it’s another double-bill of reviews but I did write a full review last week so I guess I only have to do half the work?

Well, if you wanted something half-arsed, look no further than Gone Rogue because OH BOY, the good will that was going to run out eventually. For a split second, I thought something dramatic was going to happen but here we are; a couple days late and little-to-no motivation to continue this show outside of obligation.

Did you know that this episode is the first of this show to feature the word Rogue in the title and not have Wentworth Miller? Because I certainly felt his absence! These jobber Rogues (yeah, I love Troy Jones/Phil Lamarr as Ragdoll but still…) aren’t really a threat and for saying she’s on a dark path, Nora still acts like she’s a lost puppy.

The one moment I actually applaud the episode for is when Cisco is laughing in her face at this pathetic excuse of a heel turn and she goes full ThawneWells vibro-hand on him. That is good stuff! She’s using knowledge of a former ally’s trauma to get her way in the most sadistic way possible! It’s great character work and it’s fucking wasted in this episode!

It reminds of that one scene with FutureBarry/Savitar where it seems like he might actually be open to being talked down but then he reveals it was for shits and giggles (and padding to fill out the episodes) and I’m feeling just as pissed because Nora hasn’t turned heel at all. She’s just using these techy Rogues to rob a place with a meta-dampener.

Flash Fact: McCulloch Technologies, and the Mirror Gun, is a reference to Evan McCulloch, the second Mirror Master. Additionally, the Jenni Ognats identity is a reference to the comic incarnation of XS who is a member of the Legion of Super Heroes.

So yeah, naturally the Rogues betray Nora forcing her dad to step-in and save her in, admittedly, a fun twist using image inducers. The Rogues are beaten and jailed and, naturally, the West-Allen family are reunited and now using Thawne’s plan to stop Cicada II.

Speaking of; Cicada II is related to this episode in a way because she steals the meta-cure from frozen base Cisco developed it in. I can’t remember how she knew where it was but they were more focused on making light of Ralph’s original status as Caitlin’s love interest before Danielle Panabaker put the kibosh on that plot.

But yeah, the meta-cure, coupled with the ice mcguffin from last episode, can be used to spread the meta-cure across Central City and we see Cicada II modifying the device to do just that… while her beloved uncle watches on. I honestly didn’t twig this was just her psychosis until this week’s The Girl With The Red Lightning.

The penultimate episode of the season starts to kick into maximum over-medium pace and we get the final confrontation with Cicada (can’t believe I didn’t come up with ‘Shecada’ or that it took this long for the show to) as she tries to activate her ultimate weapon that will kill every meta in the country.

It’s a pretty small-stakes end to the season-long big bad but everyone on Team Flash gets to have a go and there’s a couple interesting choreographed spots but the aftermath is the real meat.

Also, shout-out to Killer Frost with the best burn of the season!

Throughout the episode, Ralph is wondering aloud about what Thawne’s plan is because if “his plans have plans”, then what the hell does all this mean? And it’s a legit question, shame it’s brought about AFTER we see that Thawne’s timer has run out so it’s obvious that this has all been to spring him. I’m shocked. SHOCKED.

Well, not that shocked. But I’ll probably need this plan explained to me because this time travel plot is ropier than Avengers: Endgame’s explanation! Ha! Topical…

Nora with the Good Lightning is a better episode than Gone Rogue objectively but I was still mostly non-plussed, as all this rushed build-up reeks of last season’s fucking about until the penultimate episode formula. Which is a shame because I should be hyped for Thawne’s return but that was always inevitable and I’m certainly not invested in the Nora/Shecada plot soooo…

I dunno, next week’s finale is going to be an interesting watch. I have to wonder if they’ll finally go back to a speedster villain season since these two were interesting premises that ultimately fell on their respective arses and with a lot of chatter with people leaving after this season, we’ll have to see what the future holds and what will become of The Flash’s Legacy.