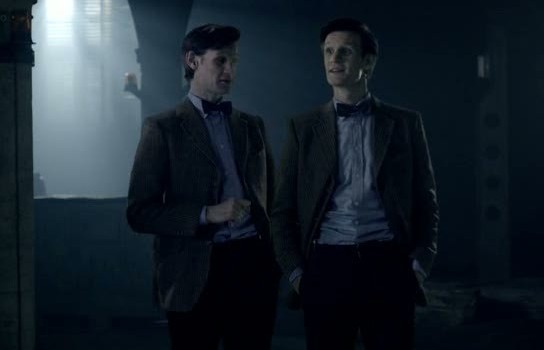 Review: Doctor Who – The Almost People Hello and welcome back to The Website of Doom’s weekly Doctor Who review column, “No, YOU’RE a TARDIS!”. I’ll admit that last week’s episode was a little underwhelming to me. But this week the ending to that story completely made up for it and finally delivered some long awaited answers. So let’s get right into it, shall we?

That episode was fantastic. Everything from the twists to the monster at the end was incredibly well done. And even though it has been done before, two Doctors on screen was a real treat.  Although keeping track of which Doctor was which was a bit confusing. But I think it was meant to be that way given the two of them pulling the old switcheroo on Amy (I’m pretty sure I’ve never been able to use that phrase before). And Amy… wasn’t really Amy after all! My jaw completely dropped (Like this —->) when ganger Amy was destroyed and it remained on the floor until the the credits stopped rolling. I did not see that coming at all.  When was she kidnapped and where did they take her? My theory is the baby is the same little girl from the first two episodes of this series. But then does that mean The Doctor impregnated her somehow given that we saw that little girl regenerate? And was her birth arranged by the Eye Patch Lady and then was she given to The Silence to be cared for so that she would kill The Doctor like we saw in “The Impossible Astronaut”?

Needless to say, this is all very confusing. Hopefully next week gives us more answers. Though I have a feeling since it’s the mid-season finale it might raise a few more than it answers.

Be sure to leave your own thoughts and theories in the comments. Thanks for reading!

Tags: Amy, Doctor Who, no you're a tardis, Rory, TARDIS, The Doctor