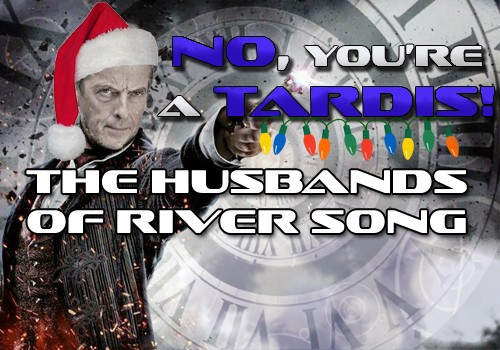 Review: Doctor Who – The Husbands of River Song

Buckle up, boys and girls… It’s the end of the story.

I’m going to have the unpopular opinion here – I know I am – but let‘s just get this over with and get back to our Christmases! The Husbands of River Song is not a great episode and that conclusion is based on a lot of aspects for me.

I wanted to like it! I wanted to LOVE it… But there’s just so many little things that bug me, I’d dare say this is the weakest of River Song’s outings and that’s awful because this is her last.

Technically, and I mean from a technical stand point, it’s sound but did anyone stop caring about certain moments when certain things occurred? Saaaaay… Asset reusage?

Seriously. This episode was made ON THE CHEAP. Not to say it’s not fine to do so, just… Try harder. We just saw that alley way set in quite a pivotal episode – you can’t dump fake snow over it and expect us not to notice it. Same with the quarry where the ship crashes, it’s clearly the same quarry where the Doctor met Babby Davros. Not to mention the big red robot in the room, clearly on lone from Dinosaurs on a Spaceship. It’s like the town called Christmas cameoing in the Zygon two-parter this season. Recognisable locales and props really need to be dressed up differently if you’re going to reuse them.

Now, I was all ready to rail against River for being a callous bitch for this episode but then she had a monologue that kind of explained some things. River’s rampant polyamory, her supposed lack of conscience and her ignorance of the Doctor’s true identity all strike me as wrong. We’ve already got a Captain Jack and confirming both Clara’s and River’s bisexuality in one season smacks of Russell T Davies and I thought we were done with that nonsense.

River has always been the pragmatist in the relationship, always willing to kill should the need be there but only as a last resort. In this episode, she appears much more cavalier about killing people and I’m glad the Doctor called her out on it.

And then there’s the complete stupidity of River NOT realising that the eccentric man in odd clothes she’s dragging on a caper is the man she loves. HOW? We waste a good 45 minutes with the ‘comical misunderstanding’ and that blows because once they’re both on the same page, Capaldi and Kingston have fantastic chemistry and it’s a shame we get so little of it.

That said, the Doctor doing the ‘first time in the TARDIS’ is pretty hilarious.

So, what does the last stand of River Song really mean? Not a whole lot in my opinion and I’m not sure whether that’s because this episode is genuinely mediocre or because this event has been five seasons in the making and it could never meet what I had in my mind. I was expecting a star-spanning adventure and what we got was a bungled caper played for laughs.

Naturally, as River’s last stand, this episode is a must-see but it’s really not her best showing. Which is a shame, because we’ll never see her again.

Merry Christmas, dear readers and we’ll be back next year for more No, YOU’RE a TARDIS.