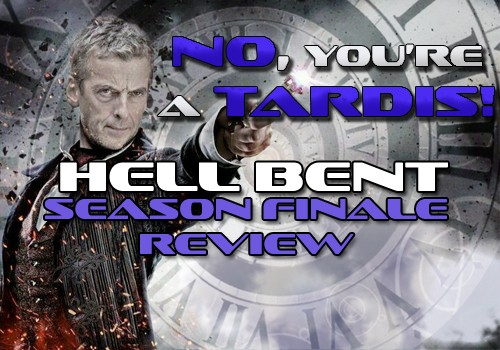 You say “Go Slow.” I fall behind. The second hand unwinds.

If you’re lost, you can look and you will find it; a personally polarising season finale of Doctor Who! Yes, season 9 is finally over and what did we learn?

That Moffat refuses to kill Clara just to spite me. I’m convinced of it now. I could have handled the DinerClara being one of the dozens of time-shadows in the Doctor’s past but this? Insert the Sideshow Bob getting hit by a rake noise here.

So what fun can we have on Gallifrey now that it’s back? Wait, that’s Rassilon!? Fuck, you really got a downgrade from The Daltonator, didn’t ya chief? Still, seeing Gallifrey’s surprising fealty for the Doctor is pretty damn cool! The General’s surprise regeneration was neat too. Changed race and gender but still kept the buzz cut! Still, that was a dick-move by the Doctor.

“Tomorrow is promised to no-one, but I insist upon my past. I am entitled to that.” I think that line sums up more about what Clara should have been in this episode than anything else. The Doctor went full Timelord Victorious by resurrecting her and while I hate that it happened, it fit with his character.

The problem is that Clara has several moments of clarity where she knows that she should not be but the tumblr-baiting shipping trash just refuses to be taken out. All the “I love you”’s unsaid and the illusory feelings of attraction taints what would otherwise be an end with shades of Donna Noble but unlike the heart-wrenching goodbye we had there…

Clara gets to live! With Ashildr! In a TARDIS. Like this is fucking FANFICTION. Fucking-fuckity-fuck right off, Moffat! In short:

But, at the very least, there is some good here. The call back to Amy and Rory is cool, as well as the default/Mark I TARDIS. Oh, and then there’s Capaldi 2.0.

With the memory of Clara gone, we get a clean slate for Capaldi’s Doctor and with a fresh Doctor comes the only things that matter. Fresh clothes and a fresh sonic screwdriver! Man, I felt such joy during this sequence, it felt great that we were getting back to basics.

So overall, how does this season finale stand? It’s entertaining and apart from some personal issues I have with it, it was a good way to close the book what was undoubtedly a dark chapter in the Doctor’s life (but not in the way we were promised.) What does the next chapter hold? Well, I know what’s coming up in just a few weeks…

And I cannot wait for Doctor Who to be fun again. See you soon!