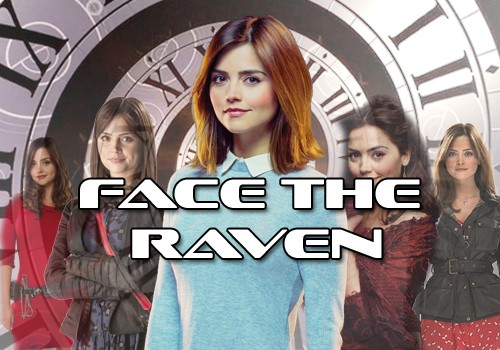 Review: Doctor Who – Face The Raven

The Clara Backdown is over. Forevermore.

First off, everyone give Jenna Coleman a round of applause. No, I’m being serious. Do it. She deserves it.

I guess I should get all the gubbins out of the way first. Rigsy’s return is very much welcome but god is he wasted here. He’s little more than a glorified extra and that’s a shame. Here was a character with a lot of charm and wit to him but he’s little more than set dressing for most of the episode.

Much like the returning Ashildr/Me, mayor of ummm… Diagon Alley. Yeah, it pretty much is, let’s face it. It’s a fantastic concept and I hope it gets revisted soon. Maisie Williams’ is just another familiar face that is ultimately thrown by the way-side. I almost wish the Paternoster Gang were here to see Clara here but I have no doubt they’d just be wasted too.

Clara’s exit was much better than I expected. It was great, in fact. A journey that began three years ago with Asylum of the Daleks, continued in The Snowmen and began proper with The Bells of St. Johns, Clara has been… Hit and miss as regular readers will know.

She’s really been getting on my tits since Capaldi became the Doctor, mostly because she was the wrong kind of companion when she was around him. On her own, she was a strong, independent woman who could stand side-by-side with anyone at UNIT and face down even the Doctor’s worst enemies. By his side… She was Martha/Rose at their worst and that’s a damn shame.

But for all her faults, for all the Tumblr-baiting bullshit we’ve had to endure and for the sake of Rigsy and his little girl, Clara sacrifices her life of her own free will. Granted, she didn’t quite know what she was doing but when she came face-to-face with the result, she embraced it. She was flawed, she was annoying and she could wind me up something fierce but when it came to her final moments…

She was brave. Jenna’s performance in this scene makes up for every single bit of annoyance. This is Jenna acting her arse off without being tied down by the BS love plot and it is glorious. It’s powerful, it’s emotional and it’s a death worthy of a companion.

In the aftermath… Hoo-boy, Capaldi gets to show his chops too. He goes full ‘Wrath of the Time Lord’ and it is chilling. I pity the poor sap who wants him captured. Post-credits sees Rigsy decorate the TARDIS with a mural for Clara and I’ll admit… That got me.
What does the future hold? I guess we’ll see who wants the Doctor so badly (and will probably regret it) next week in Heaven Sent.