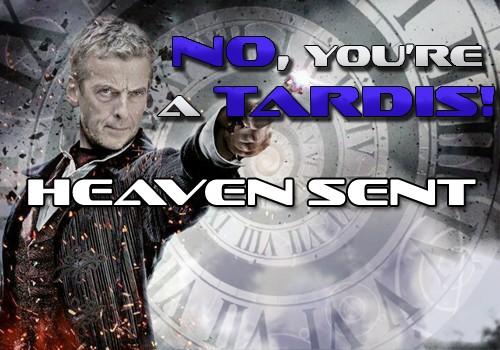 How am I meant to talk about this episode? An in-depth look into the Doctor’s grief inside an automated haunted maze of his own creation? Pfft. Fuck no. That shit’s for psyche students. I’m here for continuity and hype!

Alright. From a production stand-point, this is a fantastic episode. It was tense, atmospheric and creepy and I think that’s thanks to the directorial work of Rachel Talalay. An American director and producer, her previous work on Who includes last season’s two-part finale Dark Water/Death in Heaven and she’s running the show for this season’s finale.

Flash Fact : Talalay’s other films include her directorial debut, Freddy’s Dead: The Final Nightmare and Tank Girl. That’s right. The one who directed this piece of tense subtlety also directed…

Aaron’s favourite movie of all time. What a difference twenty years makes, huh?

Clara returns in a similar fashion to Amy, as a mental projection to the Doctor. In the words of Spoon from Dog Soldiers: “I love it when a posh bird talks dirty.”

Huh. So that’s what it does. Weird. From a plot standpoint, the whole castle thing is a dud. Sure, the concept of an automated labyrinth that the Doctor has to find the centre to is cool but the reality is just a lot of him wandering around talking to himself. Don’t get me wrong, Capaldi kept me engaged the whole time but once you know the gimmick (about 30 minutes before the episode tells you) it’s kind of… rubbish.

So yeah, this episode is cool and creepy and will keep you engaged despite not a lot happening but, let’s face it, next week is what we’re all waiting for. Gallifrey has returned home, the Doctor has come calling and one thing is for certain…