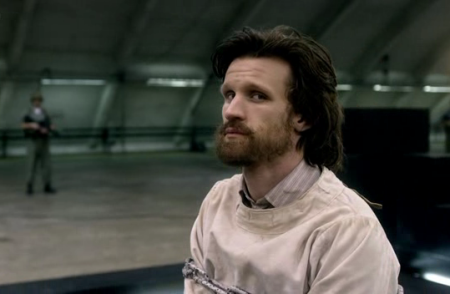 Review: Doctor Who – Day of the Moon Welcome back to DOOM’s weekly Doctor Who reviews. This week we saw the conclusion to the first story of series 6. And what a conclusion it was! Though I must say, these last two episodes have been extremely confusing. They go at breakneck speed and jump around a lot. This episode answered a few questions, but left a lot unanswered and introduced even more. I’m still not sure if I fully understand everything, but I certainly enjoyed it.

First, the Silence. They’re so creepy! Especially whenever Amy finds the huge group sleeping like bats on the ceiling. I desperately wanted someone to run in with a shotgun aimed at the ceiling. Also, keeping track of encounters with marks on their skin was a great choice aesthetically as the resemblance to scars really messes with you psychologically and adds to the creepiness. And the Doctor’s plan for defeated them was simple, elegant, and brilliant. Like any good Doctor Who conclusion should be.

River Song gets a really bad-ass moment this week with killing what seemed like dozens of Silence (Silences?) in a shoot out back to back with The Doctor. She also has a deeply tragic moment at the end when she realizes that since her and the Doctor are encountering each other in opposite directions through time, his first kiss with her was her last kiss with him. I’m going to hate to see her character go but am really looking forward to seeing what happens. The little girl is a bit of an enigma to me. She seems to be Amy’s daughter, but Amy’s pregnancy is really weird. From the monitor in the TARDIS it looked like she was somehow constantly switching from being pregnant to not. And the biggest shocker was the little girl regenerating at the end. Is she somehow also the Doctor’s daughter? Can a half-Time Lord even regenerate? Why did she kill the Doctor last episode? And if the suit can walk by itself was she even in it at the time? I have no idea but this has the potential to turn out interesting.

So there you have it, my thought on episode 2 of this series. Be sure to comment with your own thoughts and theories. Thanks for reading!

Tags: Amy, no you're a tardis, River Song, Rory, TARDIS, The Doctor, The Silence