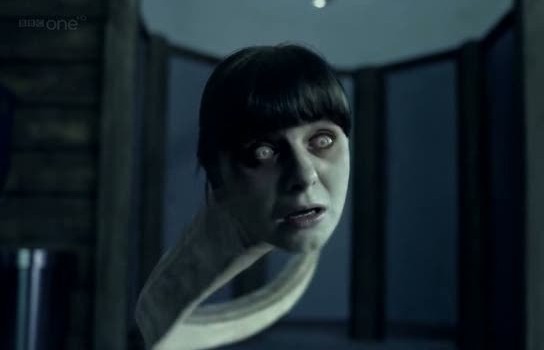 Review: Doctor Who – The Rebel Flesh Welcome back to “No, YOU’RE a TARDIS!”, Doom’s weekly Doctor Who review column. Um… uh… I don’t have anything to say here this week! Though if I just left it at that then spoilers would appear in the little summary on the front page and I would be a bit of an unintentional douche (Sorry, munchykins). Now let’s get right into the review.

First off, the cold open was pretty neat this week. Before we even learn about the clone “gangers” doing the work it just looks like these people are completely nonchalant about their co-worker taking an acid bath. But in regards to them having to use gangers to do the work in the first place, maybe the work wouldn’t be so dangerous if they took measures like bringing a stepladder or some other means of reaching that pin instead of having to stand precariously on the edge of a HUGE VAT OF ACID! That’s how Batman villains are made. Also, without looking at the Wikipedia article, I wasn’t sure if this story was set in the future or not. Did I miss them mentioning it in the episode?

But those are about the only complaints I had with this episode. Everything else was great. It was interesting seeing antagonists in this type of story that aren’t just monsters. They’re basically human and the point is really stressed by the Doctor. Though at times they do look damn creepy. The ladies head on the long neck sticking out of the bathroom stall was pure nightmare fuel. And there’s something about the Doctor’s ganger that just doesn’t sit right with me. The others basically look like Voldemort but that one is just freaky. As to ties to the overall arc of the series, this episode didn’t really give anything away, which I wish they would do already. We’re just reminded of Amy’s strange pregnancy and of the Eye Patch lady still looking in on her for some unknown reason. Hopefully we get more clues and/or answers in the near future. Overall though, this week’s episode was pretty great and the second part of the story looks to be interesting. It would be particularly cool if somehow the ganger of the Doctor survived and we got two of him but I have a feeling he’ll be conveniently killed off at the last second, which is a shame.

Well, that concludes this week’s review. As always, be sure to comment with your own thoughts and theories. Thanks for reading!

Tags: Amy, Doctor, Doctor Who, no you're a tardis, Rory, TARDIS