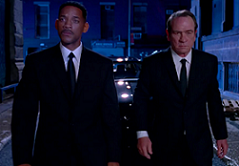 Once again, Will Smith and Tommy Lee Jones are back to fill the rolls of J and K.

Before any plot is revealed, we get to see some new alien scum, which include this creepy-looking dude:

and whatever this thing is:

The graffiti is the alien. GET IT?

We’re treated to a quip from J before he whips out a newly-designed neuralizer:

That quip was clearly worth Will's $9,000-a-week trailer.

THEN we jump into some actual plot as J tries to look up something, and is denied access. K tells him there there are things he doesn’t need to know, and we are treated to a bunch of random images, possibly having to do with whatever it is J “doesn’t need to know”. Afterwards, J storms into MIB looking for K and makes a quip to a new character played by Emma Thompson.

She tells J that K has been dead for over 40 years. J’s only solution to this problem is to go on top of an eagle on the Empire State Building, where he meets a dude who hands him a device and tells him to jump (through time).

I would totally trust this guy if he told me to jump off the Empire State Building.

Jump he does, and before he hits pavement, he lands in the late 1960’s, where he’s face-to-face with Josh Brolin as a young Agent K.

I don’t know if they used vocal enhancement for his role, but if not, Brolin does an INCREDIBLE Tommy Lee Jones impression.

Now this movie is helmed once again by Barry Sonnenfeld, who directed the last two films, and it’s his first theatrical film since RV in 2006. I’ll let you decide what that means. Despite the lame quips and the fact that Andy Worhol is listed as a character on IMDB, (THAT DUDE’S WEIRD! HE HAS TO BE AN ALIEN, AMIRITE?) I’m still holding out hope, if not for the time travel aspect. It could go either way. Men In Black II wasn’t near as good as the first in my opinion, but it was a fun revisit and slight expansion to the universe, which is what I’m hoping this one will be.

There is one thing that strikes me as odd, and it may be a total coincidence. Remember the animated series that ran on Kids WB in the between time from movie one to movie two? Well, there’s an episode that involves time travel and disappearing agents that looks eerily similar to this plot.

First, agents disappear right before J’s eyes and nobody remembers them existing.

K doesn’t end up disappearing, but he’s on the list. It’s enough for them to go back in time to meet Young K.

There’s also this guy, who’s responsible for the temporal anomaly, who has a lookalike behind bars in the trailer.

Now, they could have taken elements from the same source (the comic book), or just had the same idea, but it’s a bit odd. Oh, also Emma Thompson’s character (listed as “Oh” in on the IMDB page) looks a bit like Elle.

I don’t know what to expect, but it was a good episode of Men In Black: The Series, and watching a live action version of it might be fun. I’ll give it the benefit of the doubt. Also, I’m a sucker for time travel.