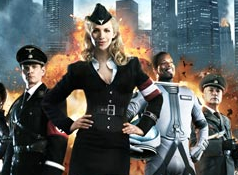 I was completely unaware of Iron Sky until I stumbled across this trailer yesterday but apparently this has had a Snakes On A Plane-like fan expectation online for a number of years. In fact if you go to the official website you’ll see that this crazy B-movie style film has been a real passion project from start to finish.

The premise is that the Nazis have been hiding on the moon for 70 years and decided to finally come to earth to mess up our day and bring a whole bunch of psycho. It’s a delightfully nutty plot and has “fun” written all over it. I’m sure “Nazis from Outer Space” was the tagline that got a lot of people interested. In fact, I’m a little dissapointed it’s not the movie’s title.

Iron Sky will be on limited release but you can demand it for your area on their website. Is it worth doing so? Well, check out the trailer and see.

– Just Incase You Forgot These Guys Are Nazis

This is why they rock as movie bad-guys. You see something like this and think “…yup”. You wouldn’t even blink. Even on the moon.

… or is this really pretty?

It’s amazing what kind of effects you can do now even with a b-movie budget.

– This Is Not Sarah Palin

Nor is it a Sarah Palin parody.

Because Sarah Palin is a crazy b**** and nobody would want her to hold a grudge with you.

– OH MY GOD THIS JACKET IS HOT!

What is going on here?

And why is it, with all the insane stuff going on in the trailer, this is the thing I have issues with?

I’ll be honest, I don’t think I’d bother to go see this on the big screen as this sort of low-budget affair rarely looks good in Tyrano-vision. But I would definitely give Iron Sky a go on DVD. Get a few friends around with some beer and pizza and I can be pretty sure a good night would be had.

Hopefully it’s able to recreate the success of the previously mentioned reptiles on an airline film.