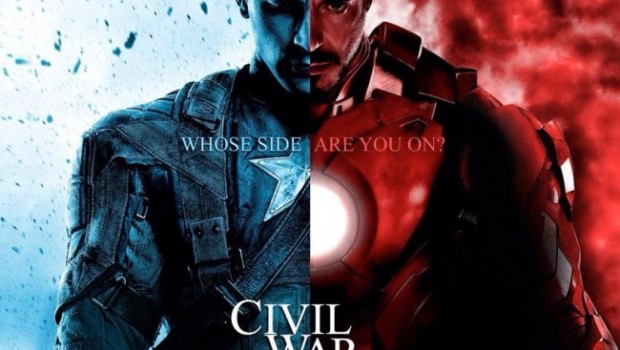 If you managed to stop watching the amazing Jessica Jones on Netflix for a minute, you might have noticed that Marvel released the first trailer for Captain America 3 last night. The movie they have, rightly or wrongly, subtitled Civil War.

It being an MCU movie it has all the returning faces you have come to expect plus, this time, a few new faces we’ve all been dying to see. The Russo brothers are at the helm once again after their rather wonderful turn directing Winter Soldier and it seems this one picks up directly where that left off with some Avengers story thrown in for good measure.

They say war is hell, what about Civil War? Lets take a look, shall we?

Our team are presented with the “Sokovia Accord”. Sokovia, if you don’t remember, is where Avengers Age of Ultron took place. This is essentially taking the place of what was called “The Superhero Registration Act” in the comics.

– Shine On You Crazy Diamond

Check out the black eye Tony is sporting here. Considering he’s normally in an iron suit, I’m fascinated to see how he got punched in his civilian clothes.

Well look what we have here. Black Panther has finally joined the party. And he looks pretty damn good.

– Gee, It’s Good To Be Together Again

So this shot seems to set up the whole crux of the movie for us. Steve Rogers and his best friend fighting side by side once again while The Man tries to take them down. It’s a wonderful way to round out 3 Captain America movies. He has had a consistent plot if nothing else.

OVERALL: There is still plenty to be revealed (a certain young hero is missing for example) but I think they’ve done a good job to tell us the bare bones of the story and set up a movie that is still 7 months away. I’m not particularly excited yet, but that could just be fatigue. I am, however, not worried about anything I see here at all. And that’s a great place to start.