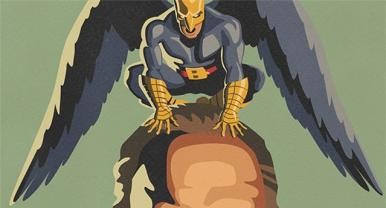 Chances are you’re not aware of this movie from Mexican director Alejandro González Iñárritu but those that are aware are incredibly excited.

In BIRDMAN, Michael Keaton plays an actor who is famous for playing a superhero in his younger days and is struggling to be taken seriously in other roles now. It’s not an autobiography, it’s just excellent casting but you might be forgiven for thinking the former.

There was some confusion when the project was announced due to the striking similarity of the titular character to Harvey Birdman, Attorney at Law. This was just accidental and more a coincidence that they wanted to create a character similar to Batman but ended up even more similar to a different character! You’ll see from the trailer, though, superficial similarities are where the connections end. This is its own beast.

Our lead in this story is slowly losing his mind so this could either be a hallucination or a clip from his old movies. I’m going to guess it’s all in his mind.

Apparently this was filmed in the actual Times Square, New York. Keaton deserves some sort of award for this alone. Nobody looks good in those.

We don’t get to see too much in this trailer but BIRDMAN already looks like a beautifully shot film. Some moments remind me of Gondry’s work on Eternal Sunshine of the Spotless Mind (no higher praise can come from me). It may not live up to the battle my teenage self would have imagined.

Overall: This looks great. I was into the idea of the story when I first heard it but this trailer has me chomping at the bit to see it now. I can’t wait.