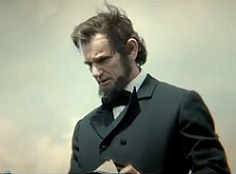 With a title like Abraham Lincoln: Vampire Hunter you’d think that this movie was tailor made for us here at DOOM Towers. However, I haven’t read the book by Seth Grahame-Smith nor had I seen or heard much of the movie before stumbling across the trailers.

I guess the film’s lack of star power might be a reason for this one slipping under my radar. Sure, the film holds Dominic Cooper and Mary Elizabeth Winstead amongst it’s cast but neither are big banner names. The director’s previous list’s big highlight is Wanted and the less said about that the better.

20th Century Fox aren’t mugs though and with Tim Burton on as producer there should be some semblance of quality behind the production. Possibly. Maybe.

Straight off the bat (no pun intended) the look of this film is better than I would have expected. This easily could have been given the look of a Syfy original movie but it has some sweet set pieces.

And this era is a great time for cinematic scenes like this.

– The Adventures Of Young Abraham Lincoln

So it’s revealed that all of Abe’s vampire killing is from his early pre-Presidential days.

Anyone else feel a little robbed of the visuals? A tophatted, funny-bearded, leader of his country killing vampires would have been fun.

– This Is My Boom Stick

… but later we see it turns into a shotgun as well? What? A f@%#ing shotgun axe?! Brilliant.

That joke up there ^^^ rather proud of that one.

Anyway, I’m a little sad to see the wire-fu broken out for this movie.

I think it would have been a lot cooler if it was down and dirty sort of grappling style fighting. Putting kung fu in a film set during the American civil war is just ridiculous…

Overall there are a lot of checks and minuses involving this film. Silly premises can be great if used correctly and this could either be a romping delight or a stupid mess. So far I’m leaning towards the delight but only just. It may be wise to wait on some reviews to come in before spending your money on this in the cinema.