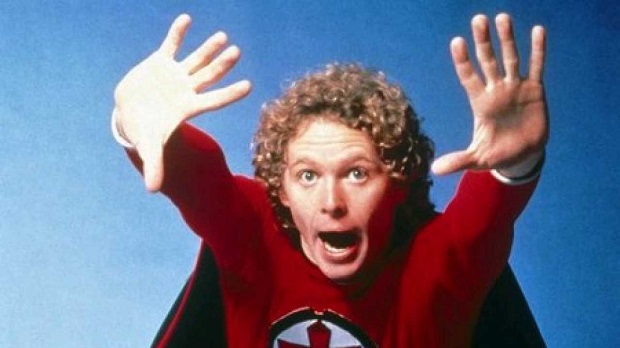 I have to admit, I have never seen an episode of this show. Ever. I could argue that it was never shown on television this side of the water, but I think it was. Considering, however, that the show was cancelled the year I was born (1983) I don’t think it was shown during the years I could understand concepts such as comedy television.

What I do know is the show’s theme tune because… damn, it’s a good one. In fact, it was so good, for a long time I didn’t even know it was associated with a TV show. I thought it was just another cheesy 80s hit from Hall & Oates  or someone. On a side note, I also thought their name was Paul & Oates for a long time, a side effect of not really listening to what people are saying. This hit was performed by Joey Scarbury when he was just 25 years old. I don’t know how fitting the lyrics are to the show. The Greatest American Hero was about a school teacher who was given a super suit by some aliens. I guess I can see some parallels in the words but you could also easily make it relevant to a show about becoming famous suddenly or also taking hallucinogenic drugs. Songs are often broad in that sense.

The video below is a fan cut edit of the theme tune. The song is exactly as it appeared but the video is re-cut to show different scenes from the show. I thought it would be a good example so if, like myself, you weren’t familiar with the program you could see a little bit more of what kind of crazy shenanigans went on. It ran for 3 seasons and it looks just as insane as Smallville. If only Clark Kent had those golden curls. Lois would have dropped those pants way sooner.