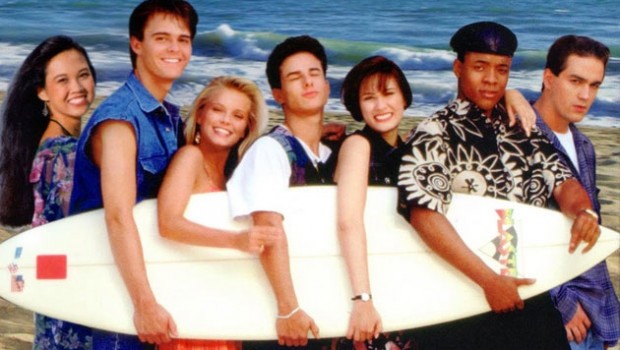 In a column about TV show theme tunes, you’d think a TV show about a band that sings its own theme tune was just a matter of time.

California Dreams ran for only 5 seasons but in a number of ways, it’s a miracle it lasted as long as it did with concept changes, cast changes, and competition with the biggest show of that era.

The first season was based around a brother and sister Matt and Jenny Garrison in the band but by season two the line-up started to change, the sister left, new members came in, and eventually the Garrisons left the show entirely. As a result the show evolved quite a bit but luckily, in my opinion, it got better as it went along.

Here is a full episode from season three when they had settled in to their new dynamic. It’s one of those “very special” episodes where the small sweet kid gets into steroids.

Check that smooth pop song though, right? Well, the original was even schmaltzier. The band played some of the cheesiest pop music you’ll ever hear (and not Mormon Death Metal as their wikipedia page claims).

Here you’ll see the band from the first season play the full theme song, when they were a 4 piece instead of 5. Noticeably the two surviving members, on bass and drums, having the least to do.

None of the original cast members have gone on to much, Kelly Packard was probably the most successful as she had a decent run in Baywatch afterwards… as much as you can call being in Baywatch “decent”. Despite this, the show managed to stay relatively strong in pop culture consciousness, even inspiring this song by Fight Like Apes titled after the show’s “Fonzie”, Jake Summers.