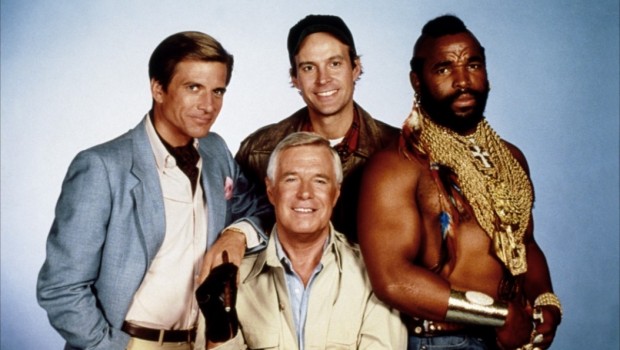 Anyone who lived through the 80s will remember the A-Team‘s orchestral instrumental theme song. Think about that, you can probably sing the instrumental melody as well as Star Wars or Superman or Indiana Jones. It had that level of pop culture impact but from the comfort of your living room couch.

It was composed by Pete Carpenter and Mike Post, two names which should be as well known as John Williams for their contribution to society as between them they’ve created the theme songs to Law & Order, NYPD Blue, The Rockford Files, Bewitched, CHiPs, Quantum Leap, Magnum, P.I., and Hill Street Blues.

But lets not forget the video accompaniment. It starts with a 20 second voice over that manages to introduce the whole premise and backstory of the show in that tiny amount of time. Then proceeds to give you a good idea of each character’s personality and ends with an army jeep flying through the air and landing upside down! Pretty sweet for 6 year old Aaron’s eyes.

The show unfortunately doesn’t hold up very well. It’s still fun to watch but more in a “oh look how bad the stunt double is for George Peppard” or “whoa, that was pretty sexist/racist/homophobic” sort of fascination. This short clip of a bar fight will give you an idea of what I mean. It’s definitely one of those shows that was of it’s time.