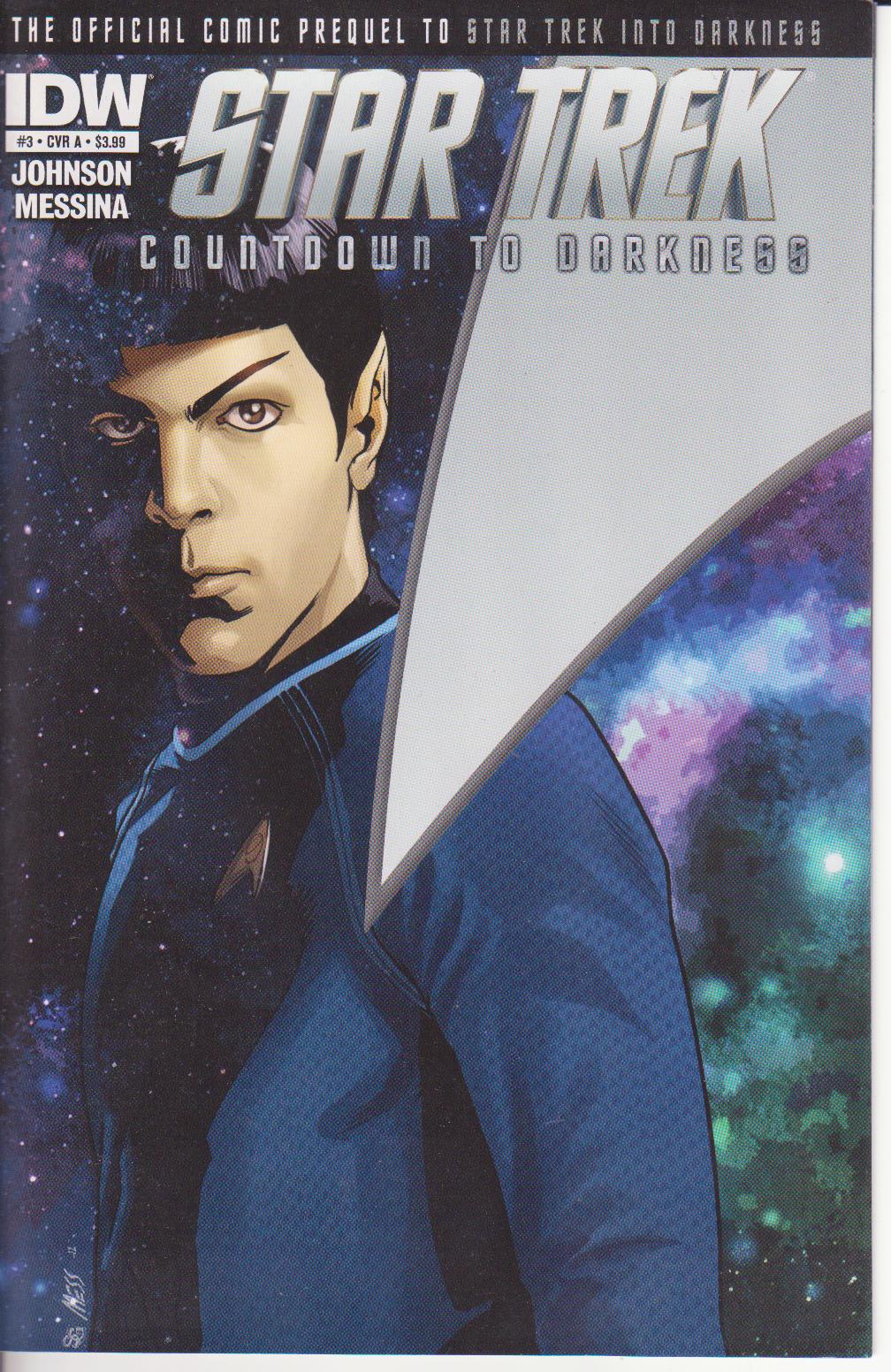 I’d like to take a moment to apologize to all my British and Australian readers. I had originally planed to have this all done by the time the movie came out. I didn’t realize you guys were getting it a week and a day earlier than we here in the States. So I am going to try and get these last two done as quickly as I can without skipping over any necessary details. I hope to have the last one out on Monday. So anyway, here we go with part 3 of the Star Trek Countdown to Darkness series. Again, if you haven’t read part One or Two yet take the time to do so now otherwise lets get on with the show! We open with Sulu and Hendroff tied up in one of the ‘Shadows’ tents. Sulu is upset that he was knocked out for the whole thing noting their captors had been given an evolutionary bump. Sulu manages to get one of his boots of to procure a knife. Hendroff mentions the numerous Star Fleet violations but Sulu tells him he had “special dispensation from the Captain to carry what ever I need.” Hendroff comments that a red shirt would never get away with that.

Back in the caverns Kirk tell April he’s going after Spock regardless of what April thinks (seeing as he lied to him about having Sulu and Hendroff.) April tries to explain his strategy when they are interrupted by one of his men.There is a new arrival on the planet and April tells Kirk he should wait before going after Spock.

Up on the surface Kirk and April greet an incoming shuttle. Mudd and Uhura come off it. Mudd tells April she has everything he asked for and more, but her shuttle is being held captive on the Enterprise. She then quickly introduces herself to Kirk, noting that she’s single! Kirk tells Uhura everything that has happened on the planet up to this point including Spock’s current situation.

Despite Mudd’s disapproval and April saying he can’t go with them Uhura and Kirk make a rescue run in the shuttle. Sulu and Hendroff now freed from their bindings are assessing their escape when the two guards out side the tent come flying in slamming into the poll, followed by Spock.

On the shuttle craft Uhura complains to Kirk about Spock and that this is the second time he unnecessarily risked his life (read Star Trek the Ongoing Series #3 and 4 for the first time). She tells him Spock is guided by his emotions, and hiding it under any logic that will fit. Kirk then asks her if he left her the conn, who has the bridge now? Spock, Sulu and Hendroff make it out of the camp but still end up being attacked by the ‘Shadows’ when the shuttle arrives to save them.

A while later everyone returns to the enterprise with Mudd and April where it is revealed that Klingons had been backing the ‘Shadows’ to help secure the planet as part of the Empire. When Kirk asks why April didn’t say that in the first place, he says he hoped that Kirk might help if he thought it was a simple civil war and not a proxy war for the planet.

April and Mudd head to the bridge and proceed to stun everyone there. Then April enters a code that gives him full reign of the ship., and shuts down access to the bridge. Spock and Kirk are told by April that he had a fail safe programed into the old Enterprise and he took a gamble that it got transferred to the new ship. They head to engineering. Neither Skotty or Spock can figure out the coding April used in his program. Kirk claims that if April attacks and army backed by Klingons he’ll start a galactic war.