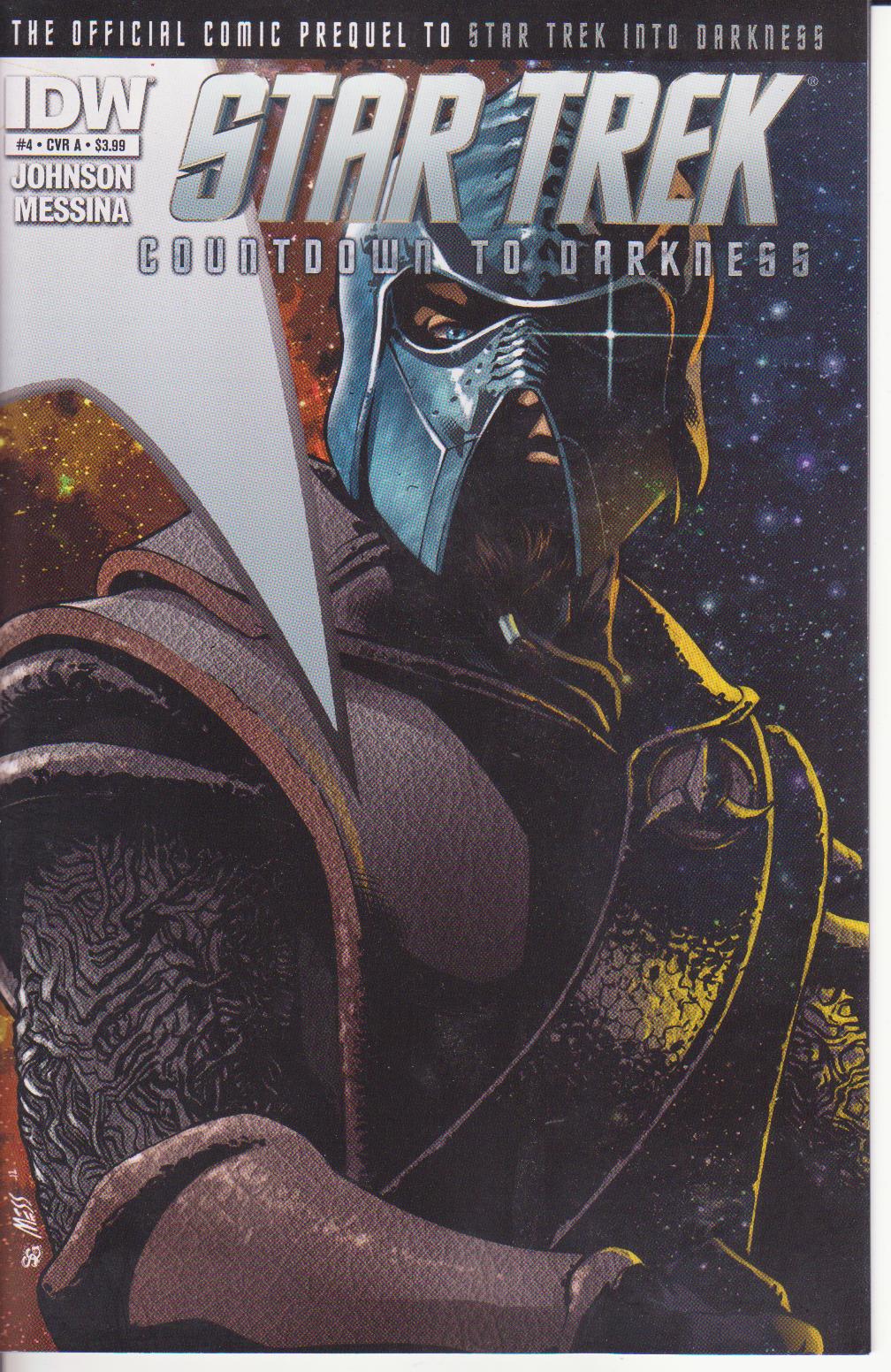 Welcome back to *TOTALLY SPOILED* where we have been going through each issue of the IDW series Star Trek: Countdown to Darkness and breaking them down. We’re doing this to get the essence of the story out to you fine folks who don’t either have the time or the money to get the series yourself. This is it folks, what you all have been waiting for, the grand finale so to speak. If this is your first time reading this make sure you go back and start from part one, and if you’re all caught up lets get into it shall we? We start this issue off on QO’NOS the Klingon homeworld. Several Klingons stand around a table talking to April on a comm device. April tell them he has accepted that Phaedus IV belongs to the Klingon Empire, and in order to secure the safty f the innocent Phaedans he asks to be made the Colonial Governor reporting to the Imperial Command. When the Klingons ask why they would allow that, April says he would give them the Enterprise.

Back on the ship Kirk,Spock and Scotty are gathered in engineering. Scotty tells them that the energy field that hit them when they arrived was gone, but April’s program has them locked out of everything, and April controls it all from the bridge. Kirk suggests they take the bridge and Spock says ‘easier said than done’ in his Vulcan way, but agrees it’s the only way. With the aid of their tricorders Kirk and Spock attempt to get to the bridge by way of the Jefferies tubes.

April opens communication with Kirk to tell him he knows what he is doing and drops a blasting shield between him and Spock. They agree to keep trying to get to the bridge separately. April rambles on about Star Fleet as Kirk kicks his way through some panels to end up in 10 forward. where Uhura, Bones and several other crew members are trapped. Kirk tells everyone they ran into some glitches. Bones asks him if what he’s look at out the window was responsible. Spock makes his way into a turbolift shaft as Scotty comes up with another solution: shut down the warp core. April begins his negotiations with the Klingon commander Kor when Scotty accomplishes his goal of “shutting off the Enterprise”. Kirk uses his badge comm to ask Scotty what’s going on and after he explains, Kirk tells him about the Klingon ship sitting outside.

Spock makes it to the bridge and hits April with a phaser on the lowest setting. April tells him he is trying to save an entire people and that the Enterprise was just one ship. Kirk gets on the bridge and shoots him again. The lights come back on and Kirk get the shields up and Spock gets them out of the area. Later in the brig Krik asks April what he was thinking, saying he could have started a war. After talking to April Spock gives the Captain an update on the bridge crew and Mudd. Kirk says he is keeping her ship, as it may come in handy some day. He says he hates that they had to run from the Klingons. Spock says that would have started a war, and though Kirk agrees he thinks April was right. That they left the Phaedans to die and if Star Fleet wasn’t out there to prevent something like that from happening, then what are they out there for?

Spock meets up with Uhura and she asks him to promise her he won’t go running off again and he does. Kirk radios Pike who informs him everything that happened is now classified information, and once he drops off April to forget about him. He tells him to proceed to the Nibin system per orders. “and Kirk, do your self a favor…remember who your real enemies are.”

Well that’s it folks, now you are prepared to go see the movie. I’m not sure how any of this is going to fit in because I haven’t seen it yet, but if you have already feel free to leave comments, thoughts, and complaints below, or head over to the Message Board of Doom! Also if you want to read these full comics for yourself click here to find a local comic book shop in your area!