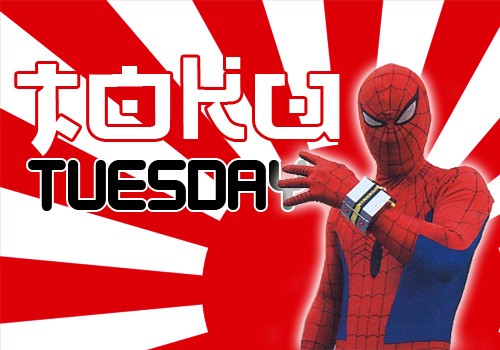 Yes, dear readers, your eyes do not deceive you! I’m covering Marvel’s friendly neighbourhood web-slinger in my article series about the wacky programs from Japan but why would I do that?

Well, gather round tomodachi because Sharp-O-dono is about to school you on the Iron Cross killer; the man who sheds tears for children without homes! The destroyer of mushrooms; a man moved by the dog whistle! The emissary of hell, himself — Spider-Man!

Yeaaaaaaaaah, buddy! We’re balls-deep in the late 70’s! It’s the Japanese Spider-Man! While Nicholas Hammond was playing Parker States-side, the Toei Company were creating their own adaptation of the wall-crawler thanks to a three-year licensing agreement with Marvel that allowed both to use each other’s properties in any way they wanted. Sadly, this did not result in Kamen Rider V3 punching Doctor Doom but what a world that would be!

Naturally, being adapted for a Japanese audience, the Spider-Man of this series is Japanese but stays faithful to the origin. Tell me if this sounds familiar…

Takuya Yamashiro, youthful motorcycle rider, witnesses the crash of the extraterrestrial warship ‘The Marveller’ and follows his father to the crash-site. After his father is murdered, Takuya discovers Garia: the last son of Planet Spider. Granted the powers of a spider thanks to a blood transfusion from Garia and given control of the Marveller via use of the Spider Bracelet, Takuya now defends Earth from Professor Monster and the Iron Cross army as… Spider-Man!

See? It’s the same, tired, old origin stor—what? Alright so it has nothing to do with the source material barring the same costume and an assortment of powers but let’s face it; this origin would make Spider-Man: Homecoming even more distinct from the previous movies. But yes, Toei’s Spider-Man ran for 41 episodes and involved such wacky plots as Amazons being resurrected to uncover Spider-Man’s identity, becoming an Interpol agent, and getting his own Batusi; the Spider-Man Boogie.

The show was praised by Marvel for it’s effects and stunt work, despite initial reservation with the liberties taken. One such liberty was Spider-Man swapping his web-swinging for a slick set of wheels in the form of the Spider Machine GP7 and The Marveller’s alternate form — Leopardon!

Oh yeah, Spidey had a giant mecha! And you know what the ironic thing is? Due to the popularity of the show, Toei decided to include giant robots in their revived Super Sentai series. That’s right, Spider-Man is actually responsible for the trend of superheroes having giant robots in Japan. Marvel, unknowingly, created Power Rangers. Mind. Blown. So what is the legacy for our favourite emissary of hell? Well, aside from influencing Super Sentai and leading to the creation of Battle Fever J, Takuya Yamashiro would sadly languish in obscurity, only rearing his head for a parody dub on YouTube and for meme material until March 2015. In the pages of Amazing Spider-Man, during the Spider-Verse event, Takuya and Leopardon arrived to assist their fellow Spiders in what is quite possibly my favourite moment in comics last year. It came out of nowhere and yet was the perfect stage for Takuya to get the recognition he deserves. So-much-so that Marvel streamed episodes of Toei’s Spider-Man for a short time on their website.

And that’s the secret origin of Supaidaman! An utterly bonkers take on Marvel’s web-head and, surprisingly, a trend-setting cult favourite in retrospect. Thanks for reading and I’ll see you all next Toku Tuesday when we dive into the West’s efforts in adapting tokusatsu as we get Lost in Adaptation.