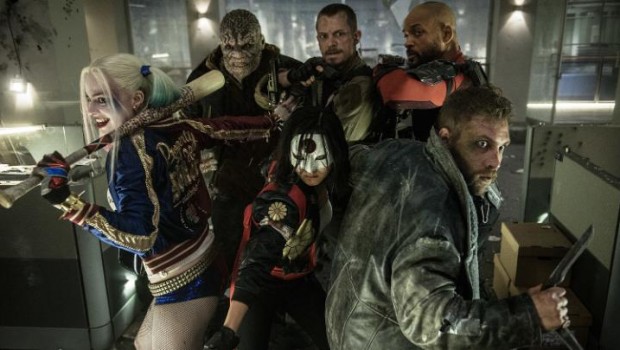 Can I be honest with you guys? I feel like we’ve built up a connection over the past 5 years I’ve been doing these (that’s right, I’ve been writing this column five long years next month). You may have noticed a tone creeping into these trailer reviews. A negative tone. You could say I have been disillusioned lately.

Warner Bros and Fox have both, consistently for a number of years now, been releasing movies that have been dull, pretentious, and completely disconnected from the comic book worlds they’ve been adapting from. And if I’m staying honest with you, dear readers, I find myself getting increasingly bored of rolling my eyes at them.

Fox have been releasing fun trailers for Deadpool and that gives me hope. But Suicide Squad… any promo photos or footage I’ve seen so far have been worrying to say the least (the less said about Jared Leto’s Joker images the better). Can this new trailer cheer me up?

Margot Robbie seems to be the next-big-thing so with her cast as perennial-fan-favourite Harley Quinn it seems WB knows they have a potential gold-mine on it’s hands and have leaned into it heavily with lots of Harley featuring in this trailer.

I’m not sure the tone is quite right, but maybe that’s because I have difficulty not comparing her to the ultimate Harley portrayal in Batman: The Animated Series. And don’t get me started on those ****ing tattoos.

– He Who Laughs Last

So, so unconvinced by everything I’ve seen on Joker in this. And it’s not even Leto’s fault. He is actually really good casting. It’s the presentation, the design, the visual choices. Grills, tattoos, everything feels wrong.

– That Makes Me A Mad Panda

I have no idea what this has to do with the rest of the movie. Nor do I care, honestly. I just love it. That is all.

– The Bad Guy In A Bad Guy Movie

They haven’t really shown us who the bad guys are in this film, they seem kinda alien-like to me. We get a few shots of tentacles and crash landings but thats all. It’s clear The Joker will be an element of antimony too but doesn’t this feel very final battle to you?

And if so, isn’t fighting a giant-bubble-brain-cloud-thing a little lame?

OVERALL– This looks fun. Does it look like an amazing translation of the comic? Probably not. But I do think there is enough there and at the very least isn’t taking itself too seriously (a huge crime in the modern movie landscape). I don’t think I’ll go see it in the cinema but I think I will see it at some point and that’s more than I would have said yesterday.