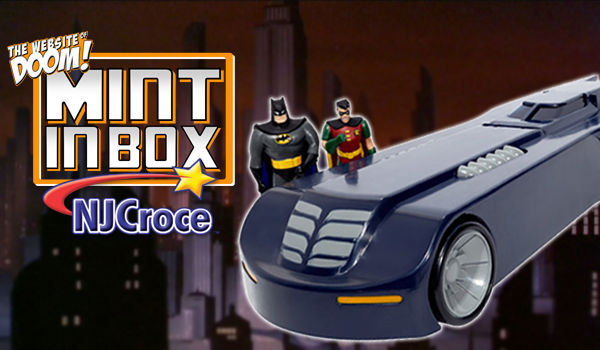 Innuendo aside, I’m happy to present another of NJ Croce’s fantastic bendable figure sets, this time from the critically acclaimed, nostalgia classic; Batman: The Animated Series. The large window box style packaging, which homages the series style to great effect, does a fantastic job of showing off the toys but also features technical specifications for the Dark Knight’s signature ride as well as some in-universe history! Batman and Robin are around 3 inches tall and emulate the Bruce Timm style very nicely, and while Batman balances pretty nicely, Robin is top-heavy and can’t stand without support. The range of movement is somewhat limited, only getting an elbow bend and outward stretch and nothing in the legs. The Batmobile itself is a gorgeous rendition of the iconic vehicle that most people think of when you say ‘Batmobile’. The deep navy blue, much like piano black, is an absolute dust magnet so you’ll have to excuse some of the images but overall, I really the look of it! Unfortunately, the wheels are completely static and the main body is all but hollow, giving it the feel of those novelty bubble bath bottles. Still it does feature an opening cockpit and the control panels are far more detailed than I imagined they would be. Good stuff! Unfortunately, the figures do not fit into the cockpit very well. I spent a fair amount of time trying to stuff them and this is the best that I could accomplish. Overall, while I really dig this set, I do not believe it is worth the 25-30 pounds/dollars you’d be spending on it since the figures lack articulation and the Batmobile itself lacks rolling wheels, but if you can pick it up for less, it would make for a fantastic display piece.