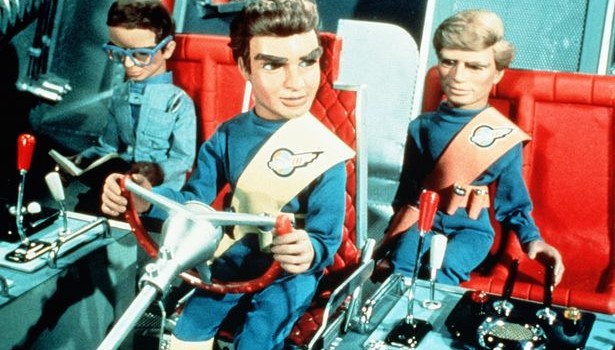 Inspired by DOOM’s rather wonderful competition to win a DVD and poster signed by the cast of Thunderbirds Are Go we’ve been talking a bit around DOOM Towers about the original 1960s TV show’s amazing theme tune.

In truth, it was a theme in two parts. The show’s now legendary countdown at the very beginning which prompted a short preview of that episode’s highlights and then the big band kicks in with the horns and drums and excitement!

The show came out in 1965, nearly 20 years before I was born, but it is etched into the consciousness of every kid of my generation and more. Thunderbirds‘ quality was so high that it never felt dated to children. The sets, explosions, the ships of both air and sea, they all felt fantastical and still futuristic so many years later.

Thunderbirds follows the heroic action by the team of IR – International Rescue who are comprised of the Tracy family, headed by ex-astronaut Jeff Tracy, their scientist Brains (his name is Brains, honest), and their secret agent Lady Penelope. Sometimes they even get dressed up like some dapper mofos. The show was created by the husband and wife duo of Gerry and Sylvia Anderson (Sylvia even voiced the iconic Lady Penelope). Their puppetry company Supermarionation also produced Stingray, Captain Scarlet and the Mysterons, and Joe 90 all of whom I will be covering at some point in this column’s future.

The show only ran two seasons but that was less about the show’s popularity but more about it being one of the most expensive TV shows that existed at the time. It’s money well spent though as having watched a couple episodes recently, Thunderbirds still holds up wonderfully and can be a great late night/early morning TV experience.

If you’re fascinated by the making of a puppetry show with all their models and sets as I am then this video is a lovely collection of behind the scene documentaries from the time of production and after.