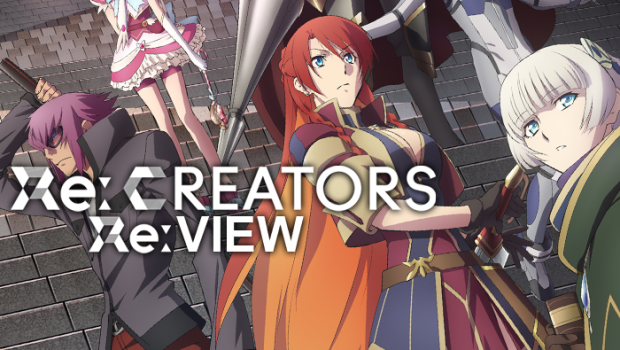 Re:CREATORS is a 22-episode original series that comes to us from the minds of Ei Aoki and Rei Hiroe of the animation studio, Troyca. It’s currently available on Amazon’s video streaming service and, in my mind, is one of those anime series that comes along rarely and changes the game in some way. Neon Genesis Evangelion and Gurren Lagann reinvented, then reinvented again, the mecha genre. Puella Magi Madoka Magica recontextualized what it means to be a ‘magic girl’ and this series is no different.

Re:CREATORS takes a more meta approach to it’s message and asks important questions I myself have wondered while writing: What if the characters you created could take you to task for the world you built around them? Would they hate you? Would they want to change it? How far would they go to achieve their happy ending? Even the show’s title is a double entendre; being read as both recreators and as regarding: creators.

The story from the outset is a bit of a mystery as a young woman tragically commits suicide before hardcutting to the show’s ‘protagonist’, Sota Mizushino. I say ‘protagonist’ because once the story kicks into gear, he’s not really part of the plot. He has moments here and there but, for the most part, the series is about the relationships between the Creations that have suddenly appeared in the real world and their Creators and the ongoing battle to stop the mysterious Altair from unravelling the very fabric of reality.

Consider this your SPOILER WARNING because I’ll be getting into story and plot details from here on out and while I’m not going to outright give away the ending, I will be talking about how I think the show cleverly uses the tropes of anime to subvert your expectations. Like I said before, the key to the show’s engagement with me was the relationships between Creations and Creators and how it’s unique for each character. Selesia and Matsubara act like father and daughter, arguing constantly but with an underlying affection for one another, to the point where Matsubara will defend Selesia against anyone who considers her ‘unreal’.

Meteora’s creator sadly died shortly after finishing her game and struggles with that information before playing her own game and sees how much love and dedication was put into her world. Magane Chikujoin seemingly kills her creator because she’s both an agent of chaos and a delightful scamp. There’s a few others but those are couple highlights to give you an idea. We see other characters struggle with how different their worlds are in comparison to the world of their Creators and wonder how one ‘god’ can create the magical girl Mamika, an avatar of sweetness and naivety and another can create Aliceteria, a battle-hardened warrior from an unforgiving world of carnage. Seeing these two interact and how their tragic stories unfold, especially given their contrasting personalities, is one of the most impactful relationships in the show.

And then we come to Altair; a Creation born of tragedy and revenge. Her Creator is/was Setsuna Shimazaki and was never given a backstory or an established power set but is somehow incredibly adept at reality manipulation, with a wide variety of abilities that no one can understand how she got them. Her plan is to bring more and more Creations into the world of the Creators/Gods and the resulting backlash of causality will destroy Earth and all of the story worlds created from it.

I focus on her because she’s an interesting cautionary tale for Mary Sue character types. An author insert character in any story can too easily become the epitome of cool badassery that everyone loves and this is especially true for Altair who was essentially given all her power by people on the internet creating various works for this abandoned character.

Audience engagement is how she grows more powerful and why the Creations we meet were chosen. They’re popular, beloved and because of that investment, it creates more reality backlash when they suddenly appear in the real world with their magic and giant robots intact. Naturally, other concerns are explored like rewriting character descriptions with varying degrees of success, which ends up becoming a key part of the endgame with Altair as the Creations and Creators rally for a cross-media event on levels only the Japanese can pull off. It helps that the animation is absolutely stunning as well. I said I won’t give away the ending but suffice to say that there’s action, heartbreak, emotional whiplash, and more than it’s fair share of hype moments that keep you as engaged in the outcome as the audience in the show.

Special shout-out to the series composer Hiroyuki Sawano for the excellent theme songs “gravityWall” and “sh0ut” and for the incidental tracks in the show itself. His work on Attack on Titan and Kill La Kill were fantastic and he brings an industrial electronica vibe to the tracks for this show.

I hope my gushing has piqued your interest in this show because I believe this is a show for writers and creators to enjoy, both for it’s meta-narrative but for it’s genuinely engaging and emotional story. You can find Re:CREATORS on Amazon.com’s video streaming section. If you’d like to see more anime reviews on DOOM, let me know in the comments and I’ll catch you guys next time!