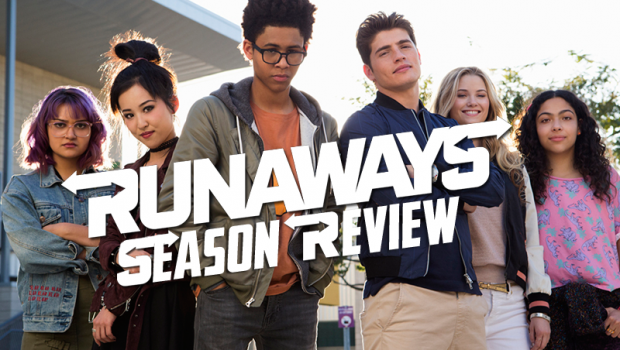 Runaways, the much beloved Marvel comic book series from 2003, was created by Brian K. Vaughan and Adrian Alphona. It was a wonderful series that gained a ravenous following through trade sales which saved the series from cancellation in 2005.

The comic series followed the exploits of six kids who find out their parents are a cabal of super villains who commit  ritualistic murder in the name of a trio of elder gods. As you can imagine, much hilarity ensued. Well, a lot of coming-of-age stories, character development, heel turns, deaths and comedic shenanigans ensued and I thoroughly loved it.

When I heard Hulu would be adapting the show; I was intrigued because the base story is pretty simple and the team of Josh Schwartz and Stephanie Savage are no strangers to teen dramas (both having involvement in both The O.C. and Gossip Girl) so how did this ten-episode first season fair?

I really enjoyed it. It was engaging, well presented, and a unique Marvel TV outing that wasn’t mired in the ever-expanding Marvel Cinematic Universe. That’s not to say it doesn’t have it’s eccentricities and missteps so what worked and what didn’t?

Well, first up, I have to applaud the cast. Mixing well established actors with fresh faces, the show does a great job of letting both the parents and the kids breath and they all give good-to-great performances and the dynamics between them are both complex and believable.

But while spending time with the kids is part and parcel of Runaways, we spend almost as much time exploring the parents and this gets into one of my biggest gripes about the show; making the bad guys relatable. While I did enjoy this predatory PTA group and their plot lines, the series makes them too likeable. The show spends a lot of time almost walking back all of their bad deeds and that’s just not the right move as it messes with the pacing something chronic.

The kids need to run away. They’re Runaways. You can’t do that when the parents are just so… nice. Barring the habitual homicide, naturally. You feel bad for them, you care about what they have going on and what they stand to lose but they’re the bad guys and why-oh-why does this show make me love the Yorkes so much?

Most of this comes for my love of the comics and the fact that The Pride was a ruthlessly efficient criminal group, consolidating every disparate criminal element of the Marvel universe. The Wilders were both gangsters, the Yorkes were time-travellers (not hippy bio-engineers), the Steins were mad scientists (half right, I suppose), the Minorus were wizards (again, half-right), the Deans were aliens (close enough) and the Hayes family (renamed to Hernandez in the show) were mutants.

It was a clever idea to completely bypass the mutant issue by killing off Molly’s parents before the show started and leave it ambiguous as to where Molly’s powers come from. Not a bad idea, at all! But then the other PRIDE members are only partly related to their origins or worse – not at all. You could say that they’re trying to keep the show grounded but that idea goes out the window when the dinosaur shows up. That said, the changes aren’t too obtrusive and, for the uninitiated, I can appreciate this will give you more if you don’t care for the kids too much.

Which is pretty easy to do because the early episodes can turn you off some characters. I mean, the kids do act like kids and that means they can be irrational and shitty to each other for almost no reason but this does feed into the overall arc they all go through; as a distant group of friends reunited under stressful circumstances.

But it can be grating, especially when Gert is being a cow or Alex is doing nothing. Because that’s all he does. I feel sorry for Rhenzy Feliz because Alex is the one non-powered/non-equipped character in the group and is mostly defined by two things; being in a relationship with Nico and a plot development that will probably come about in the second season but it’s good to see there is some subtle building to that in this one.

Shame about the Nico/Karolina relationship though. While there are instances in the comic of a shared attraction between the two, Nico ultimately doesn’t get off the pot and Karolina ends up with two of the best queer characters in comics. I dunno if we’ll ever see them given the rabid reaction to this pairing though…

The Chase/Gert pairing is pretty solid though and their dynamic matches the comic pretty closely. Almost as closely as the connection between Gert and Old Lace, the genetically-engineered Deinonychus.

This was the hardest sell to me as the Marvel TV productions have some pretty bad CGI but Old Lace is rendered brilliantly in a combination of practical puppetry and computer generated effects. I was surprised at how emotive she was and the mix of effects served the show well.

Molly was another point of contention to me since she’s noticeably older to the pre-teen powerhouse of the books but ageing her up to being only 1-2 years younger than the rest was a good move and Allegra Acosta does a fantastic job of portraying one of my favourite Marvel mutants. To paraphrase Chase: She’s genuinely nice, I can’t think of a bad thing to say about her.

So yeah, I enjoyed Runaways. It was certainly nice to see something a little different from Marvel and it gives me hope for the likes of Cloak & Dagger and New Warriors but what does that mean for Runaways? Well the series has been warmly received and been greenlit for a second season and with the kids now on the run for a crime they didn’t commit, this could lead to the introduction of some of the other comic book characters though how they’d adapt a 100 year-old vampire, the son of Ultron, a gender-fluid Skrull love interest for Karolina, and a chlorokinetic child bride from 1907. Those are all real, I promise.

I think the immediate questions that need to be answered are how are the kids going to clear their names, what-or-who is buried under Los Angeles and who is Jonah? I can’t wait to find out! If you have any thoughts on Runaways, please be sure to post them in the comments!