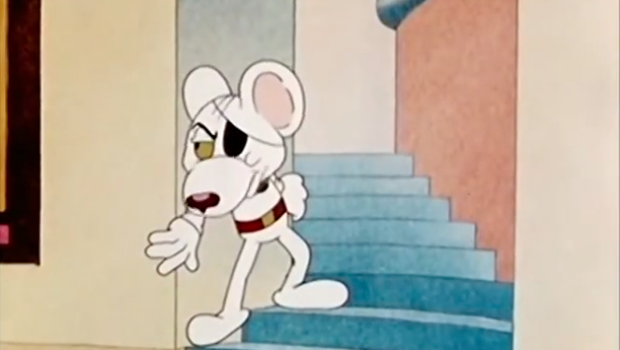 This week for They Don’t Make Them Like They Used To I’m focusing on the cult 1980s British cartoon Danger Mouse. I say “cult” but the show ran for 10 seasons. Despite the cartoon’s longevity it never reached the same height of fame, especially internationally, like other cartoons of the 80s. Those who did watch, however, loved it passionately. As did I.

The show was narrated by legendary English comedy actor David Jason and he also voiced the eponymous hero. Danger Mouse was a super spy, moulded much in the same vein as James Bond and Sherlock Holmes. He was closely followed everywhere by his assistant Penfold, whose blundering often both caused and cured many of DM’s problems. The fun in the show was very British with lots of puns and wordplay long with endless breaking of the 4th wall. This sort of anarchic comedy was always my favourite. It makes proceedings both incredibly clever and dumb simultaneously. Something we pride ourselves on here at DOOM Towers. Wink.

The show mirrored and enhanced this aesthetic with its fast and frantic theme song. As a parody of spy adventures, it manages to capture the pulp feel of those tales along with the ridiculous over-hyping of the main character at the same time. To conclude by blowing up the title? C’mon, you might as well be recruiting me.

Here is a full episode. It’s ten minutes long so how could you say no?

Word-up, this is very much a show of it’s time and is possibly not considered 100% PC in places now.