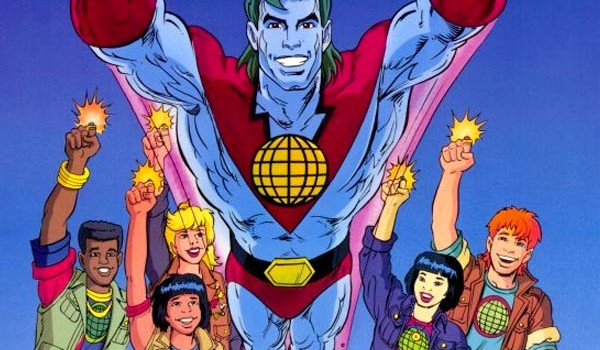 Earth, fire, wind, water, heart… GO PLANET! We all know it. That mantra never leaves us.

While Captain Planet & The Planeteers, to give it its full title, was an admirable show morally it does however falls apart when you think about it for too long. We never really questioned the vague locations for the children, as an example. From “Asia…” I mean, what? And if Captain Planet was their powers combined, what was the point of splitting those powers up into rings? Get it together, Gaia. And don’t even get me started on “heart”. Worst power ever.

Did you know that Whoopi Goldberg was the voice of Gaia (essentially Mother Earth) for the first three seasons and then was replaced with Lois Lane herself Margot Kidder for the second three seasons? Or that the Planeteer with the power of earth, Kwame, was voiced by none other than Geordi LaForge himself LeVar Burton! Pretty cool, huh? There are lots of great guest voices too like Tim Curry, Sting, and Jeff Goldblum but that’s where the coolness dies, I’m afraid, because everything after that was dorky as hell.

In fact, the show was so lame that the theme tune we all remember it for is actually the credits music. That’s right, its theme song is at the end of the show not at the beginning. Here is the first ever episode as a shining example:

The show changed a bit over the series but here is something I did not know at all until I researched this article. The original intro explaining everyone’s situation was replaced by a rather odd rap in the final season. This rap was performed by Fred Schneider of the legendary B52s! Check it out in the video below: