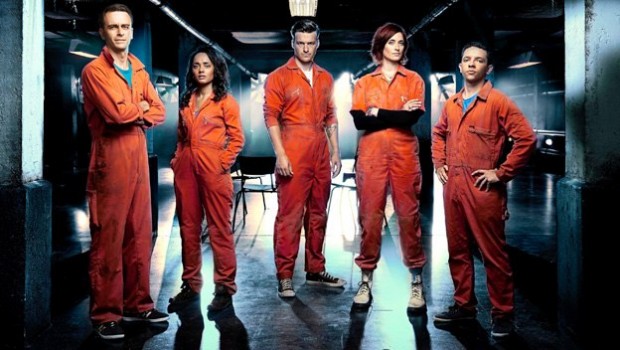 So here it is, the second episode of the final season of Misfits!

After the first episode’s heavier action and theoretical stakes (what with the whole “agents of Satan” thing) this second episode kinda takes a more grounded look as it focuses more on Rudy’s character and home life, with a little bit on Abbey’s mysterious past™ and the vague introduction of a new guy with a power, and a bunch of other stuff and I guess actually they packed quite a lot in again.

So essentially the deal with this episode is that Rudy discovers his dad cheating on his mum and decides to look into it and try to fix things and is generally unprepared and inadequate at either. It’s a pretty good example of how childish and immature he is, so pairing him up with Jess works well for these segments, although it can show a bit of light on how little Jess is actually doing by herself (her desired action until guided by the plot is to go get a facial).

To a degree this is fine, since she works well as a supporting character, I just wish she had more of a chance to stand out as a character who drives and guides plot/action actively, rather than just briefly and (eventually) ineffectively as in the previous episode. Maybe I’m just forgetting stuff though, and hopefully she’ll get to carry a story in the coming episodes.

Ultimately, this episode is kind of a mirror of last season’s Three Rudy’s episode (Season 4, Episode 3) which I guess is being heavily lent on this season, with the whole “evil version” idea repeated with a separate result, in that this time nobody dies. This echo is probably more strong because of the references to Rudy having gone “mental again” and the Rudy/Jess pairing, which I think seems to be by itself the sole reason for the implied attraction by the end of the episode? I mean does nobody remember that whole Nadine thing or what? I guess they just got stuck on that third episode.

Oh, and it’s cool to see the dynamic between the two Rudy’s continue to evolve, with Rudy Two feeling more and more left out and invisible and trying to assert himself, and Rudy One expressing more doubt and sadness, which I guess is growth that can -technically- be at least partially attributed to the Nadine stuff (which if I’m remembering right kind of kick-started the whole balance between the two Rudy’s) so I am now BACK ON BOARD within the space of one paragraph with this whole thing of whatever’s going on.

And yeah, that whole subtle hinting I was doing there is because I am ONE HUNDRED PERCENT CERTAIN that Rudy Too is the invisible dude on that jumper (Rudy One was on the roof in this episode so I am JUST AS CERTAIN that’s a call-foward too) and that there will be another power swap this season, on account of how this episode introduced Sam, this whole new flying guy! And, yeah he’s not particularly graceful at it and seems to be kinda introverted and sorta-reminds me of the Season 3 comic guy, but more importantly he doesn’t have red hair like in the jumper so THERE. SO THERE. I am fully on board with the jumper and will never question it.

Oh wait and the car-stealing crime guys from Season 2 showed back up and Finn showed off a little telekinesis at them (and in this episode was -finally- kinda caught for living in the community centre) so maybe there’ll be some consequences for that (almost definitely not). The other thing that I forgot to talk about was the whole slapstick Tarantino-ish dinner scene between Rudy and his parents, that was for the most part pretty hilarious but then just -slightly- edged out too far into that kind of Vicar of Dibley Christmas-y thing (going just -slightly- too far with a joke can be kind of a problem sometimes with Misfits).

And Abbey’s mysterious past™ might include lovin’ a lady (the whole thing was pretty dreamlike and weird and mostly involved smells and it was strange?). And Tim (the videogame guy) has made an appointment to go for a drink with Rudy Two some time which will presumably pay off with meeting Rudy One and the whole thing turning out badly for everyone. Also everybody cast on the show continues to be great and put in believable performances (sorry for not saying more about probation worker Greg (Shaun Dooley) because he’s amazing but didn’t do much this episode apart from that minor scene with Finn) and I really like this show you guys, in conclusion two out of five stars.

Next up: Kind of a horror lookin’ one, with more scenes between Greg and Finn.