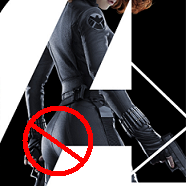 It Puts The A in Avengers.

Released today were some new banners for the up-coming Avengers movie, a movie we here in DOOM Towers are all excited to see. What I’m not excited to see though is lame T & A (which, for those of you unaware of that phrase, is boobies and bum-bum).

I’ve gone on rants before about bad movie posters and one of the worst offences modern movies can make is bad photoshopping. It’s common already and needs to stop, we’re far too used to seeing fake images online to be incapable of telling the difference. This has that with Captain America looking like a cartoon and such. But I guess I can live with that in this case because this is meant more as a teaser than a full blown advertisement.

However, the picture containing Scarlett Johansson as the Black Widow has no excuses in my mind. Not only is she the only character with her back to camera (to show off her… well we can all see it) furthermore her head has been badly photoshopped so that it fits along with her butt into the picture. That’s right folks, who needs a neck when you’ve got a booty?

It’s sad, it’s blatant and it’s something I seriously thought the Marvel Movie production team were above. Alas, I was wrong. Apparently it’s still the 1990s.

Am I making a mountain over a curved, firm molehill? You be the judge. But personally I thought we had moved beyond this sort of pandering in this day and age.

With thanks to ComicsAlliance for the heads up of the images.