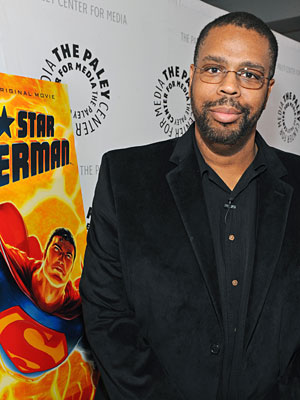 A Moment to Acknowledge the Masterwork of a Fallen Hero, or

Recently the comics, animation, and regular world in general lost a great man.  Dwayne McDuffie was an extremely talented writer who wasn’t afraid to deal with sensitive issues and speak out about injustices and miss-portrayals he saw in the comics medium, even if it damaged his career.  He created the groundbreaking series Damage Control, then went on to help found Milestone Comics and introduced us to characters such as Icon and Static. He also enjoyed a well written but criminally short run on Justice League.  But comics weren’t the only genre to be affected by McDuffie.  Dwayne had a very successful career in writing for animation.  He was a major force in crafting the Ben 10 franchise and wrote for the animated series based on his most popular character, Static Shock. But we’re here today…well, I’m here today, to talk about perhaps his greatest animated work, Justice League and it’s sequel show, Justice League Unlimited. The apex of the DC Animated Universe, JL/U was a show unlike anything before.  It took the concept of Superfriends and extracted the suck out of it.  It could be crazy, subtle, funny, serious, mature, and fun all at the same time.  It took risks, it never talked down to it’s young audience, while providing them with insane superhero action scenes as well as epic storytelling.  It had a fantastic cast, clear direction, and staff truly in love with what they were working with, and none more so than Dwayne McDuffie, who wrote some of the greatest episodes of the series whose quality exceeds most of the stuff being shown on TV today, both live action and animated. After a climatic battle between The League and the Superman Revenge Squad, the Man of Steel seemingly perishes when blasted by a mysterious beam from Toyman’s robot.  As the world and the League react and try to adjust to a world without him, Superman must find a way to return home from the desolate world he’s been transported to, and he get’s help from an unexpected friend, the immortal Vandal Savage.

This episode took the emotional beats from The Death of Superman story, but leaves out the knockdown drag out fight with Doomsday and the four replacement Superman, which here aren’t really missed at all.  Hereafter just gets right to the point.  It deals with a world without Superman but doesn’t drag on and isn’t too somber.  In fact, when Lobo enters the episode the tone shifts completely to action packed and humorous.  The Superman story in part 2 is also very compelling.  With Superman powerless in this new world, he has to rely on his own survival skills, and Dwayne portrays Superman as skilled and intelligent and doesn’t need his strength and speed to survive.  It’s touching, it’s weird, and it has a pretty ballsy ending.

JLU wasn’t always serious, occasionally the show would indulge in some light-hearted moments, and Great Brain Robbery was one of the funniest episodes of the series.  After a psychic backlash, Flash and Lex Luthor switch minds.  While Lex uses the Flash’s powers to wreak havoc on the Watchtower, Flash must try to come off as a convincing Luthor to a legion of supervillians that are ready to mutiny at the drop of a hat.  Dwayne knew exactly what he was working with in this episode.  It’s an overused premise that came off as fresh and entertaining, with some truly hilarious moments, some a little risque for a kids cartoon.  Not to mention this bit of gold: After the multi-layered, gripping story arc season 1 finale (which I’ll get to later), the episodes in JLU season 2 were more low key and stand alone. It still had an overarching plot line, but the episodes were allowed to be their own separate entities.  And after all the drama of season 2, they earned this finale for the series, a knockdown drag out battle between the combined might of the League and the Legion of Doom, against Darkseid and his armies for the fate of the Earth.  Yeah there wasn’t much in the way of depth in this episode, but it didn’t matter, the action was intense and each of the Big Seven had their own chance to shine.  But the crowning moment of this episode comes in the form of this brilliantly written monologue from Superman as he’s beating the high holy shit out of Darkseid.

Wall-to-wall kick ass superhero action.  Not exactly a perfect finale for the series, but a damn fun one.

The mini-movie that served as the end of Justice League, and paved the way to go Unlimited.  Earth has been invaded by the Thanagarian army, and the Justice League has been betrayed by Hawkgirl.  While the League must regroup from their defeat and save the world, Hawkgirl must decide where her true loyalties lie.  Starcrossed was a major turning point in the show.  It had everything, epic story, great action, lasting character development, strong emotional core, and a change in the status quo.  It took the League to its lowest point, defeated, in hiding, betrayed by one of their own, and to watch them battle back from all of that is truly entertaining.  This three-parter was the quintessential story in the growing relationship between Hawkgirl and Green Lantern John Stewart (and by the way, it took some serious cojones to pull of an interracial romance in a show targeted to the mainstream).  Dwayne took chances with Starcrossed and delivered a brilliant tale of betrayal, love, sacrifice, and redemption. The Cadmus storyline that encompassed all of season 1 of Justice League Unlimited was without question, the best written anything to come out of DC in the past seven years.  Project Cadmus was a shadow organization comprised of government officials, high ranking military personnel, mercenaries, power brokers, and criminals with one sole purpose: to take down the Justice League.  This is a story that started way back in the first season of JL with an episode called “A Better World” which featured an alternate time line where the League became merciless dictators reforming the world under their brand of justice.  That stand alone episode set up a multi-episode arc that pitted the League against it’s greatest challenge.  They weren’t up against traditional villains they could swoop in and punch, Cadmus believed themselves guardians of the human race against meta humans.  Cadmus, led by Amanda Waller and bankrolled by Presidential candidate Lex Luthor, saw the League as a threat too powerful to be left unchecked, and in some respects they were right.  They wanted to take down the League, but they did it in a strategic and low key way.  They tarnished the Leagues reputation, caused in-fighting amongst them , their goal was to see the League fall from grace and from their seats of power.  For a good ten episodes, the word’s greatest heroes matched wits with a very non traditional enemy, and of course, being a Bruce Timm show, it ends with an epic battle that features The Flash’s greatest moment:

The best episode on the Cadmus arc I feel was Question Authority.  The Question, the resident crackpot conspiracy theorist/detective of the League, voiced by Jeffery Combs, discovers the true motives behind Cadmus’ actions in some stolen files, and what he finds shakes him to the core.  He begins to doubt the trustworthiness of the League and reasons that the end result of this JL/Cadmus battle will result in Armageddon.  In order to prevent this The Question, in what is perhaps one of the darkest moments ever put into a kids cartoon, goes to kill Lex Luthor in order to prevent Superman from doing it first, which would result in the doomsday scenario he had feared.  Question Authority was intense.  It set the stakes and showed that a 30 minute animated superhero cartoon could still be more compelling and well written then any live action drama.

Dwayne McDuffie had an encyclopedic knowledge of the DCU, and a knack for storytelling, and he combined them both to help craft one of the greatest shows to ever air on television.  His episodes could range from fun and whimsical to edge of your seat gripping.  Not only did he do justice to established characters like Superman, Batman, and Wonder Woman, but he shone some light on lesser known characters like John Stewart, Vixen, The Question, and showed they could be just as engaging. Race, gender, status, it didn’t matter with McDuffie, he just told good stories.  He knew his audience, and he delivered to them, never once talking down to them.  The world needed Justice League, and Justice League needed Dwayne McDuffie.

Rest in Peace, sir.  You were just as much a super hero as the characters you wrote.