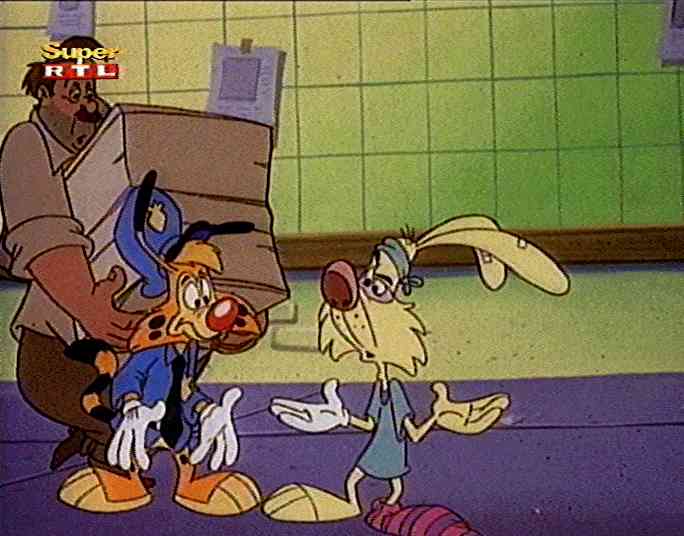 Wow, You’ve Been Gone for Almost a Year and you Come Back with Another Dumb List

Wow, how long has it been?  Wait, don’t answer that, the answer is too long.  Yeah I haven’t been good about making much time for Doom anymore.  Truth is, Extreme Inbetweens has always seemed like a chore for me to write.  With the numerous other animation blogs out there, most run by people with far more knowledge of the medium than I do, it was hard to try to come at it with a unique view point.  Let’s all be honest, this column was never cutting edge and I never tried to make it that, but every time I posted a new article I just felt really down about it, thinking that I have no place writing about animation when my knowledge is nowhere near as vast as guys like Jerry Beck, Michael Barrier, or Amid Amidi.  Plus, I hate writing.  I’d rather do animation thank write columns about it.  Plus, now that I’m trying to get a job in the industry, I have to be careful about what I say.  Can’t risk pissing off potential employers. So, I’m thinking this may be my last Extreme Inbetweens.  I don’t seem to have the heart for it anymore, so I’m gonna bow out gracefully.

But don’t cry, Toonsters.  That doesn’t mean I’m done with Doom.  Far from it.  I have an idea about a new column I want to do.  About something far easier for me to talk on and on about.  And if the Lords of Doom deem it worthy, I’ll be coming out with it pretty soon.  And who knows, maybe this wont be the last for Extreme Inbetweens.  Like Brett Farve it could come out of retirement even though it’s far past it’s prime for one last romp, and then later tweet pictures of it’s penis  The future isn’t set in stone.

But enough of that rambling, let’s get to the point of this column.  Staring with Felix the Cat back in the 1920’s, cartoons have played host to a myriad of larger than life superstars that become just as real to us as any flesh and blood celebrity.  They come in all shapes, sizes, and species.  From mice, to rabbits, to cats, to sailors, to sponges.  They can be wise-cracking like Bugs, dopey like Homer, cowardly like Scooby, or mega-maniacal like The Brain.  The best part about it is there’s a character for everyone.  There’s at least one cartoon character out there that speaks to everyone’s inner or outer self.  Today, I’m gonna list my top five favorite cartoon characters.  The characters that I see a little bit of myself in, and who never fail to entertain the hell out of me. Hanna Barbera had some great characters (they had to, seeing as how there animation quality was less than stellar).  They had great designs, stellar voice acting behind them, and likeable personalities. My favorite of the bunch used to be Yogi bear, I always had a fondness for the slick and scheming character.  But, while I still have a fondness for Yogi, I’ve found new appeal in the character of Huckleberry Hound.  I like Huck because there’s no ego with him whatsoeverHe’s pretty much a simpleton, but not dumb.  Smart enough to at least get the job done, and he had lot of jobs.  Policeman, spy, cowboy, you name it, that was the beauty of his character, he could exist in so many roles.  It wasn’t about what he does, but who he is.  Huck was easy going, polite, and had his own great charm.  The only thing more fun than seeing huck win out at the end, was seeing how far the antagonist of the cartoon could push Huck before he get’s riled up, it was usually pretty far, but Huck was a character that could stay cool under pressure, and I admire that.  Plus, you can’t beat Daws Butler’s stellar vocal performance.  That sweet, southern drawl just made the character that much more loveable.

Bonkers was such an underrated cartoon.  In the spirit of Roger Rabbit, it had great characters, voice acting, animation, writing, and setting.  It had a multitude of original and creative cartoony characters, and the best out of the bunch was Fall Apart Rabbit.  Fall Apart was the title character, Bonker’s, friend and stun double, preforming the more dangerous stunts in Bonker’s features during his days as a cartoon star. Fall Apart is aptly names seeing as how he frequently falls apart, being able to detach and re-attach virtually all of his limbs.  Like I said before, I’ve always liked the good natured, simpleton characters, and that was Fall Apart.  He was a scattered brain moron, but he meant no harm, and was helpful in his own way.  In addition, he was really funny, his constant bumbling and stupidity never once got annoying.  Throw in Frank Welker’s voice acting and you’ve got a great character that, like so many other Disney Afternoon stars, have gone criminally unused.

Eek the Cat was one of the seminal cartoons of the 90’s, and best represented that decade in television animation.  It was absurd, edgy, satirical,loud, and appealed just as much to adults as it did to kids, maybe more so.  Thee star of the show was a short, purple cat named Eek who’s motto was, “it never hurts to help”, which for him it often did.  But he didn’t care, Eek, voiced by creator Bill Kopp, was always willing to lend a helping hand to anyone in need, even though it tended to do more harm than good on both sides.  We’ve seen so many cartoon stars motivated by personal gain that Eek was a refresher, he was just a nice guy, but it didn’t make him boring. On the contrary, we could easily sympathize with Eek and all the chaos he endured just make sure someone else got what they wanted at the end.  I really wissomeone was doing more with Eek.  he’s too good a character to let fade into nostalgic oblivion.

In my opinion, Daffy Duck was not only the greatest Looney Tune character, but possibly the most perfect cartoon character of all time.  He’s nutty. he’s chaotic, he’s extravagant, he pretty much embodies the spirit of the Looney Tunes.  Chuck Jones once said “Bugs is who we want to be, Daffy is who we are”; Well, with all due respect to the great master, I’d have to say the opposite.  While Bugs Bunny is great, Daffy represents everything I want to be, an unrepentant, nonsensical, anarchist.  At least early Daffy does, I’m not a fan of the contemporary Jones-version, which turned the character into an egotistical, greedy coward, I much prefer the fearless force of nature he was in the Bob Clampett/Tex Avery years.  Daffy did whatever the hell he  wanted and took glee in making hapless stooges suffer, much like Bugs except Daffy never needed a reason to do it.  Daffy Duck is that little spark in all of us wanting to unleash hell on a cruel unforgiving world, he’s the chaos to Porky Pig’s order, he’s the best damn character to come out of the golden age. If there was ever a character that represented my cartoon upbringing, it’s Launchpad McQuack.  First appearing in as a supporting character in Ducktales then later made the jump to 1991’s Darkwing Duck as the title characters sidekick, Launchpad was a barrel-chested, bone-headed, but otherwise courageous pilot who was proud of his ability to crash anything he flew. Launchpad was a staple of the Disney Afternoon and pretty much it’s best character.  He worked great as a supporting character to the likes of Scrooge McDuck and Darkwing, and could even carry a few cartoons on his own.  There was so much to his character that was just fun to explore; he was like this daring jack-of-all-trades who brought this great spirit of fun to every episode he appeared in.  The fact that Disney isn’t doing anything with him anymore pisses me off to no end.  He should be on t-shirts, he should be appearing in the parks, he should be staring in his own cartoons (he almost did, as TaleSpin was originally concieved as a staring vehicle for him).  Launchpad is my absolute favorite cartoon character of all time and I wont rest until he’s returned in full force to the Disney universe….okay, maybe I will rest but dammit I want him back!

So there you have it, the last Extreme Inbetweens…for now.  What’s next…something good, trust me.  And it wont be limited to just cartoons.  But I won’t spoil too much.

Don’t touch that dial, Toonsters.  we’ll be right back.