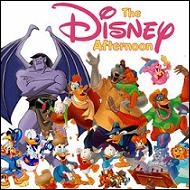 A Fond Look Back at a Cherished Portion of the Childhood of a 90’s Youth. Or, The Disney Afternoon: A Retrospective

And now I finish this behemoth of an article.  I’ve already covered the major shows of the line up, from the one that started it all, Gummi Bears, to the much beloved DuckTales, Chip ‘n Dale Rescue Rangers, and TaleSpin, to the ever popular Darkwing Duck, the energetic Goof Troop, the criminally underrated Bonkers, and the spectacular epic that was Gargoyles.  Now we focus on the rest of the shows that made up this block and look at the lasting legacy the Disney Afternoon has left behind. One of the more notable shows of the line-up was Aladdin the Series.  Taking place after the Return of Jafar, Direct-to-Video sequel to 1992’s Aladdin, the animated series continued the escapades of Aladdin, Princess Jasmine, Abu, Iago, and the Genie.  All the original cast members returned to reprise their roles with the exception of Robin Williams, who was since replaced by Dan Castellaneta (aka Homer Simpson), as the voice of Genie.  The show lasted for three seasons, and had Aladdin going up against an entire rogues gallery of villains, previous villain Jafar now replaced with such characters as Mirage (an Egyptian cat-like sorceress), Mechanicles (a mad Greek inventor), Mozenrath (an evil wizard), and the bumbling thief Abs Mahl (get it?).  Another thing notable about the show is that it’s all in continuity.  Disney turned Aladdin into a franchise, starting with the first two films, continuing with the series, and culminating with Aladdin and the King of Thieves, which saw the return of Robin Williams to the role he made famous.  The show, while not amazing, was still fun and engaging.  It built a strong world full of funny, colorful characters, and at times the show got surprisingly deep.  Another show to come from a Disney movie was Timon and Pumbaa.  As you could probably guess, the show was a spin-off of 1994’s The Lion King and stared the comic relief duo Timon the Meerkat, and Pumbaa the Warthog.  This show is a little harder to review because I haven’t seen it in years and episodes of the show are hard to find online, but from what I remember the show was very slapstick in tone and took the duo through adventures in and out of the jungle.  I can’t say whether or not the cartoon still holds up, but if any of you can find it, let me know.

Quack Pack came out in 1996.  The show was a semi-continuation of DuckTales in that it starred Huey, Dewey, and Louie, this time as pre-teens and with different voices.  In DuckTales the trio was voiced by Minnie Mouse herself, Russi Taylor, this show had Huey voiced by Jeannie Elias (Beth Oblong) Dewey voiced by Pamella Segall (Spinelli and Bobby Hill), and Louie voiced by Elizabeth Daily (Tommy Pickles and Buttercup).  The boys starred alongside Donald Duck rather than Uncle Scrooge.  In the show, Donald was the cameraman to reporter Daisy Duck, and the trio followed them around, causing mischief, mayhem, and all that jazz.  While not as timeless and exciting as DuckTales, the show had its quirks, but ultimately was unpopular due to it’s lack of coherent plot, slapsticky nature, and drastic differences from it’s predecessor.  Still, it had a snappy theme song.

Also in 1996 was another duck-heavy show, Mighty Ducks the Animated Series. Now, if you’re thinking this show was a cartoon about the hockey team, you’d be half right. The show was based on the hockey team, only the team was comprised of six anthropomorphic alien ducks who also doubled as superheroes… yes, that is the plot.  The nineties was a weird time.  The Mighty Ducks (consisting of leader Wildwing, his little brother Nosedive, strongman Grin, ex-thief Duke L’Orange, ass-kicking chick Mallory, and tech guru Tanya) were from a world called Puckworld, a world of alien ducks who’s society is enamored with hockey…stay with me people.  They battled the evil Lord Dragaunus (voiced by Tim Curry) and his minions, all while becoming major hockey stars.  Yes, the show was so ridiculous it made Ninja Turtles look like a Scorsese flick, but it was a pretty cool show.  The theme song was jammin’, the voice cast rocked, and it had some pretty awesome action that every kid needed to see after school.  In addition, the show had a great sense of humor about itself and frequently broke the fourth wall for comedic effect, which made the premise easy to swallow.  Duke L’Orange was my favorite character.  Voiced by Jeff Bennett (who also voiced Brooklyn in Gargoyles, my favorite character in that show), he was mysterious, cool, sarcastic, and had a freakin’ beam sword.  FREAKIN’.  BEAM.  SWORD.  Instant win in my book.  If you can find some episodes, give it watch.  Don’t expect brilliance, expect dumb fun.  The last show I want to bring up is a show that very few people probably remember.  Coming out in 1993, The Schnookums and Meat Funny Cartoon Show had a brief tenure of popularity.  The show, created by Bill Kopp, voice of Eek the Cat, featured a cat named Schnookums and a Dog named Meat and the funny cartoon adventures they got into.  The show’s animation was very reminiscent of Ren and Stimpy, though nowhere near as good.  The show was comprised of three segments, Schnookums and Meat, Tex Tinstar (a Jay Ward style western cartoon), and Pith Possum (a Batman parody).  The show, from what I remember of it, was…okay.  I honestly don’t remember much of anything of it past the name.  Well, that and the pasta it inspired. The Disney Afternoon quietly faded away in 1997.  The shows aired sporadically on the Toon Disney network alongside other Disney owned cartoons such as Adventures of Sonic the Hedgehog and Wild West C.O.W.-Boys of Moo Mesa, until they were eventually pushed off the network when it became more focused on the Jetex block of shows.  Today the network is now called Disney XD and is now more focused on skateboarding and sports and all that crap.  Gargoyles is the only show still left and it airs at one in the morning.  Gummi Bears, Rescue Rangers, Darkwing Duck, TaleSpin, Gargoyles and DuckTales were released on DVD over time, but due to low sales Disney discontinued releasing them, each just one volume away from completion, dammit.  Goof Troop was only released as a three episode disc and Bonkers never saw a release at all.  As for the theme park, Disney Afternoon Avenue has since been replaced by Mickey’s Toon Town, with the rides either restructured or taken out, with the exception of Gadget’s Go-Coaster which is still standing, almost 20 years after the show ended.

The shows still remain popular with loyal fans and people who grew up in the 90’s (in some cases almost too popular, never Google Gadget Hackwrench with Safe Search off..you did it didn’t you?  Now do you see?  You sick bastard).  Gargoyles has a particularly loyal following and even a convention known as The Gathering.  Gargoyles also experienced a brief resurrection in comic book form, but was canceled very early.  Recently, Boom Studios has had success in resurrecting former DA shows, re-branding the Uncle Scrooge comics as DuckTales and incorporating characters from the show like Launchpad and Gizmoduck, and launching ongoing comics of Darkwing Duck and Chip ‘n Dale Rescue Rangers with writer Ian Brill at the helm.  The majority of the shows still exist in their entirely on YouTube and are readily available for audiences new and old to view.  Disney cartoon shows now have achieved similar levels of popularity, but lack the same amount of charm and heart.  Maybe it’s because I’m old, but Kim Possible and Phineas and Ferb just don’t invoke the same magic of DuckTales or excitement of Darkwing Duck, or even the same weirdness as Mighty Ducks.

From 1990 to 1997, Disney was going through a Renaissance, not just with their films, but with their cartoons.  That was truly a special time to be a kid.  We laughed, we learned, and we memorized all those damn catchy theme songs.  There was so much to do, and it was waiting just for you.  This has been a retrospective  on the Disney Afternoon.