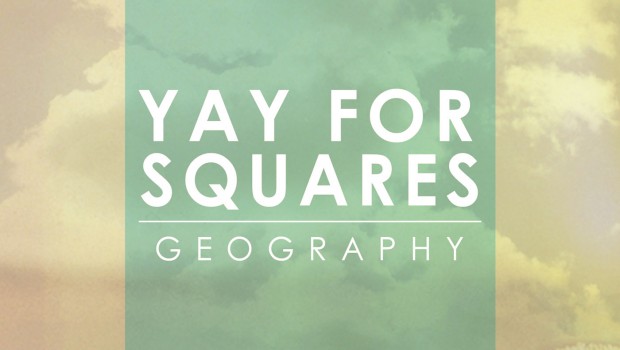 Back in 2007 a much younger Aaron Fever visited Waco, Texas to hang out with some friends. Those friends were in a band and as such, for a period, my musical world revolved around Waco. This is when I was introduced to Yay For Squares. They had a four track EP which featured songs with anthemic choruses, hard rock riffs, and catchy yet emotional lyrics. If a band was built to tick all my musical boxes, it was Yay For Squares. Alas, the show I saw them play was to be their last and the band split.

7 years later: Caleb Lee, Jason Himstedt, and Justin Horrell have reformed with an 8 track release called Geography. We here at DOOM Towers got sent an advanced preview of the release before anyone else and I could not have been giddier.

However, the issue is that 7 years is a long time. Very few things in this life age well but more than most, rock bands age horribly. So many become dated and soft before they realise it. It’s the nature of the beast. Rock and roll was invented from teenage rebellion and nobody is a teenager forever. No matter how hard we try. The good news is; very little has changed.

First track “My Plan” starts with an intro composed of 8-bit music almost in a nod to the metaphorical step back in time. Then the familiar feedback kicks in. For a three piece band YFS are incredibly adept at creating a rich wall of sound.

Some songs tend to last a little bit longer than is probably necessary. I feel like YFS work at their best in the fast-paced pop-rock format but their occasional indulgence can be forgiven considering their long absence. It seems they’re enjoying the experience with long instrumental sections and while that reminds me of some of my favourite live rock shows, sometimes it needs to be kept there.

They really find their niche though with the exciting up-tempo tracks like “This Story” and “Unwilling, Ungrateful” while “Madeline” couldn’t be more 90s grunge if it wanted to (and for those who don’t know me well, that is a compliment).

There are moments when I’m reminded of the likes of Weezer and Incubus but if I was to compare what they’re doing to any band I think it would be Biffy Clyro. If Geography was released as a Biffy Clyro b-sides album it would sell somewhere around 50,000 copies and would be touted by music magazines the world over. Alas, Geography might never shift that many units but if any of those bands interest you I don’t think you’ll regret getting it.

It becomes available to download on the 21st of July from all the usual places but you can keep up to date on releases and live shows at the newly re-launched www.yayforsquares.com.