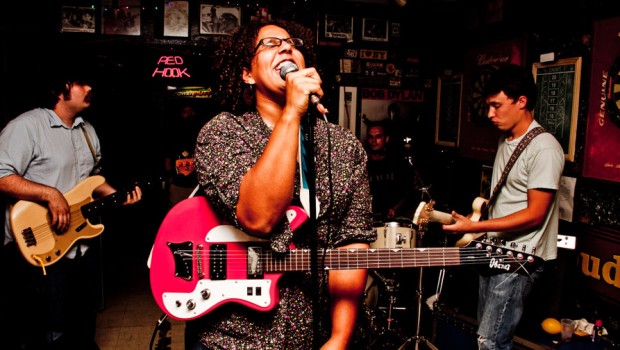 This year there were only five albums that I actually handed over money to own. This is a big drop in numbers from last year’s twelve. I put this down to most of the big bands spending this year touring but also 2015 will definitely be seen as the year of the pop-album resurgence. I haven’t been convinced by many but shout out to Carly Rae Jepsen for surprising me with the high quality of her album Emotion.

Anyway, here are my five albums of 2015 I thought were worth my money… This is the second album from the blues rock band. Their first felt so raw and vibrant because of how authentic their sound was to the genre. It was a classic example of what is now and old sound despite being a modern take on it.

Sound & Color however updates their vibe to a more complex, more sonic experience. It’s hard not to be taken aback by it at first as it’s a massive step-up even at the production level of their music but after a couple plays you start to see the threads of what drew you in to them in the first place. Soulful singing, lyrics of yearning and regret, and some great, dirty guitar beats.

There have been no big hits from this album but this live video is a great example of why, in my eyes, they’re both a vital part of the music scene and a band worth catching in concert. Get To Heaven is the third album from the English band and contains all the swagger of a band who have gone from strength to strength on the festival and live circuit. They have not experienced any kind of over-night success but a steady and sustained rise with critical adoration but relatively small public acknowledgment.

This holds slightly less of the energetic melody changes and urgency of their second release but much more bombastic songs with a shorter but to the point play time. Lyrically they’ve always been a bit all over the place and nothing really changes here with “Spring / Sun / Winter / Dread” having lines like; “Are those my people or are they barbarians all? I need a shoulder to talk to about it. Swing the hammer. The fragments. A skull exploding on you, on all you and showers on the infant’s bed”. You know. As you do.

They’ve a couple of mad-as-a-brush videos worth looking up online but here is my favourite from this album for “Regret”. Another band that have seemingly matured their sound significantly are Fight Like Apes. They’re still having fun, they’re still naming songs with endless pop culture references (first song on the album “I’m Not A Merry Man” being a prime example). But after leaving their label, going it alone, and a couple line-up changes I think it was inevitable for them to move on in more ways than one.

This is their third album, which I’ve always believed define bands for better or worse. I was genuinely worried for after all the changes to their make-up in the past year or two that they would become another “remember them?” band like so many great Irish indie outfits a la The Chalets. Thankfully, this album has the confidence of a band determined not to be stopped.

“Crouching Bees”, below, was the first single and did quite well. If you ever get a chance to catch them live I can’t recommend it enough. There is an air of general chaos that spins around lead singer MayKay and heart-of-the-band Pockets when they play. They’re just as likely to break their instruments as they are to rugby tackle each other in the crowd. It’s a visceral experience.

Florence + The Machine – How Big, How Blue, How Beautiful Florence Welch specifically came out and said that she wanted to change the band’s perception of writing big, powerful ballads and decided to use this album to write more intimate sounding songs. For the main part she has accomplished that but what she’s also done is take away what made Florence + The Machine so special.

They cut a path through most of the “too cool to care” bands on the indie scene to present a much more artistic and flamboyant alternative. It was like when The Smiths’ Morrissey showed up with his blouse open swinging flowers in the middle of all the other Manchester bands around him trying to be as hard as possible. If you lose that, you may still keep the solid musical sensibilities but you lose the flair that lifts you above the crowd.

Florence excels on the big stage and there are very few bigger in this world than the main stage at Glastonbury. There are no stand-out tracks from the album but this is a good example of what’s there. Released this month, Get Rekt managed to squeeze in to this list but somehow got played more than any of the albums above on my iPod. In a year full of slightly disappointing releases from bands who are established and maturing, it took an album from an unsigned artist to really get me excited.

The album opens with the anthemic rock sound of “Totino’s Party Pizza (For One)” and sets the tone lyrically with the chorus “Who you gonna share your cool ass life with you lonely sack of shit?”. Maybe it’s because we’re seemingly in a similar place in our lives but Seth’s uncanny ability to make you tap your feet to a song about the fleeting nature of love or the futility of craving a better life is both uncanny and impressive. He has found a way to shine a light on modern life and how internet culture intersects feeds while simultaneously cripples our loneliness. But, you know, with guitars and stuff.

Get Rekt is definitely my album of 2015 and I really can’t recommend it enough. Because of it’s very recent release, no videos from the album yet but we’ll be posting an interview podcast with Seth in about two weeks so hang tight for more content!

To listen to all the albums from this list in full, check out the Spotify playlist I made https://open.spotify.com/user/aaronfever/playlist/1toV11WzdfOLKQr09kNEeX