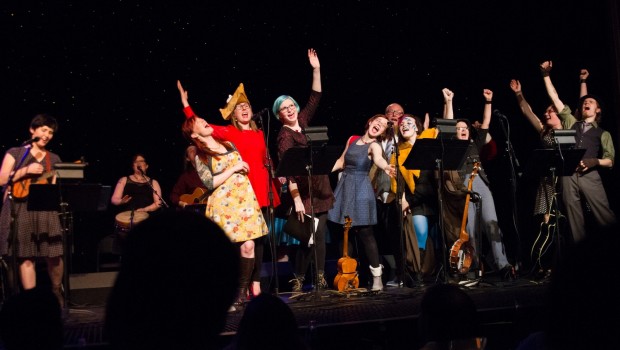 It’s November now, which is what our American friends refer to as the start of the “holiday season”. It’s also the month of Thanksgiving. This holiday is near and dear to the heart of ukelady Molly Lewis. She feels it’s better than the much celebrated Christmas and wants the world to re-evaluate their priorities. This is her musical show telling that tale.

Molly is joined by the cool-internet-nerd-squad of Joseph Scrimshaw, Vixy & Tony, Marian Call, Seth Boyer, Josh A. Cagan, Nicole Dieker, The Mongrel Jews, Kiri Callaghan, The Doubleclicks, and Kevin Murphy. Between them they round out Thanksgiving vs. Christmas which was recorded last year in front of a live audience. The album contains the full comedy show and 11 tracks of original songs who’s topics range from pumpkin spice latte to Doctor Who to Hanukkah. First of all, it’s great to hear Molly backed by a band with strings. She has always been a wonderful solo musician but it adds a breath of fresh air to hear her accompanied by such a rich sound. However, while she features heavily in the show it’s very much an ensemble piece with highlights ranging from Marian Call’s manic work in the kitchen, Joseph Scrimshaw’s snarky narrator, and Kevin Murphy’s cameo as Santa Clause who (or is it whom?) tells us all to get bent.

This is the sort of concept that we don’t see much of anymore. It’s an old fashioned variety holiday show that you might have gotten in the 60s and 70s but is kind of seen as the domain of someone like Michael Bublé now. While the theme may be dated this show remains modern due to the sardonic wit of its cast and with lots of knowing nods of over-the-top enthusiasm.

Molly Lewis, despite making music for around ten years now, is still relatively early in her career. For someone in their mid 20s to be able to write, and pull off, a full show as polished as this one is incredibly impressive. The show’s topics are purposefully scattershot and sometimes bizarre but they make sense within the modern landscape of the internet community. I especially recommend you listen to Molly’s song demos on the expanded album’s special features.

So if you’re looking for a musical comedy album about Thanksgiving, Christmas, and Hannukah (and who isn’t?!) this has to rate at the very least in the Top 3 examples of that very specific genre.

You can listen to and buy the album here > https://mollylewis.bandcamp.com/album/thanksgiving-vs-christmas