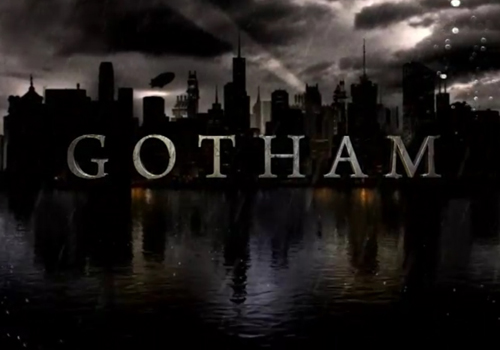 “This great city… it will endure. Gotham will survive.”It’s taken YEARS to get anything even remotely Batman-y onto television screens that wasn’t animated. There was talk about it during Smallville but then we had the Nolan trilogy so that put the kibosh on that. There’s rumours of Nightwing appearing in Arrow but we’ll have to wait and see but finally, we’re getting a live-action Batman show on television. Let’s look at the trailer!

Gotham is a prequel series, not tying into any future cinematic universe DC is trying to build but as a general mythos builder. Kinda sounds like Smallville, and there are a fair few similarities in that respect but hopefully we won’t have anything nearly that rubbish.

“I moustache you a question.” Ben McKenzie (best known for his lead role in The O.C.) is playing a fresh-faced Jim Gordon, assigned to the high profile murder case of Thomas and Martha Wayne. From what little we see, this Jim is a bit rough and tumble, a war veteran and shows the makings of the Jim Gordon we know.

A load of Bullocks Donal Logue (Sons of Anarchy, Vikings) is Harvey Bullock, Jim’s new partner and seeming mentor as he’s got a couple years on him at least.

Something fishy about her… Jada Pinkett Smith (Yes, Will Smith’s wife) plays Fish Mooney, a rather oddly named original character, as far as I can tell. Never heard the name before and if she is a DC character, she is VERY obscure. Mooney is a sadistic crime boss.

“Why do we fall, Master Bruce?” What could be the biggest flaw in this show is the introduction of younger versions of established DC characters. Most importantly, a young Bruce Wayne. The young actor is David Mazouz and, unfortunately, I’ve never seen anything he’s been in but he seems to get what a young Bruce Wayne would sound like. We don’t see him in the trailer but apparently Sean Pertwee will play Alfred and after Michael Caine’s performance, I’m looking forward to more funny British butlers. This is where I start to worry about these younger characters. A young Oswald Cobblepot? Sure, I can buy that. Edward Nygma as a GCPD forensic scientist? Ehhhhh, okay… Tween Selina Kyle in a psuedo-Catwoman attire sneaking around Wayne Manor? Hey, that’s a little on the nose there, pal. Baby Poison Ivy?

No, fuck right off, that’s stupid. She wasn’t even shown in any other part of the trailer just “Before Posion Ivy” and cut to a little blond girl watering plants. Even JL8 has more subtlety than that.

Overall, I’ll give Gotham a shot. If Arrow has taught me anything, it’s that DC shows can work out and be really damn good. This could be the closest thing we’ll get to seeing a Gotham Central TV show and I know a fair few DOOM staffers would love to see that happen. Then again, this is Fox so we’re all expecting this to get cancelled, right? Gotham should be hitting our screens later this year.